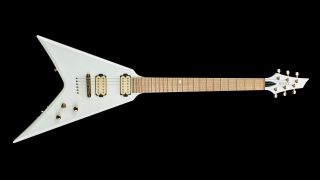 If you thought the controversy that followed Gibson's notorious 'play authentic' video, its lawsuit against Dean and Flying V EU trademark appeal had died down, that's about to change. Kiesel are now squaring off against the guitar giant.

The news has surfaced in a video published on Kiesel Guitars' Instagram channel with company Vice-President Jeff Kiesel said that the company had recently received a cease-and-desist letter from Gibson.

The subject concerns Kiesel’s Ultra-V model and what Gibson claims are apparent similarities to the Flying V.

In the video Kiesel contests that “their trademark was fulfilled in 1995; our model came out [under the Carvin name] in 1986.”

Kiesel adds: “I named the Ultra V, so I think it was about ’86 when it came out, I was seven years old, so it’s a really special model to me.

“So, to have those bozos try to tell us we can’t make it any more when it looks literally nothing like it... I mean, come on guys, look at the pointed body, look at the bevel on it: does that look anything like their V?”

. When you get a cease and desist letter almost 40 years after your model comes out... (p.s. their trademark was fulfilled in 1995, our model came out in 1986) Taken straight from our Wednesday Live #KieselGuitars #Kiesel #kieselfamily #guitar #858guitars #jointhefamily #electricguitar #customshoppride Kiesel Guitars

Following that video Kiesel spoke to The Guitologist YouTube channel, where he laid out his own perspective on the issue with a new twist; Gibson has also issued a cease and desist over the Kiesel CS6 California Single.

The California Single was launched in 2006, the year after the ruling in the infamous 2005 PRS vs Gibson case, which ended up favour of PRS and its Singlecut design.

But despite this weighty pair of legal letters hanging over the company, Kiesel is defiant.

“We have to give a letter back to them, but we’ll let them know that, ‘Hey, if you need to go ahead and sue us, that’s okay,’  Jeff Kiesel explains.

“It’s not a battle they’re going to win, and we’re not gonna back down. Because at the end of the day, we have logic and facts behind us; they have nothing. They just have pure emotion.”