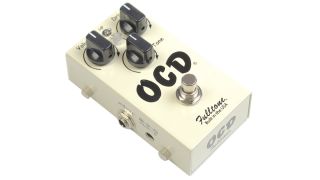 "I apolgize [sic] to anybody I’ve offended, and believe that anyone who abuses or harms another person should be prosecuted to the fullest extent of the law, that includes cops," he wrote on Facebook.

The boutique pedal pioneer's original inflammatory remarks on the ongoing George Floyd protests read, “What is this like night 4 of looting with 100% impunity. The pussy Mayor and Governor don’t give a shit about small businesses, and it’s never been more clear.”

Fuller then poured fuel on the fire, commenting on his own post, “Ahh I feel better, and flushed out some prissy boys who were raised to pee sitting down. Now I’ll delete.”

A backlash was swift, and is ongoing.

Hey musicians: Fulltone Pedals isn’t on twitter but here’s what they have to say about the protests. FUCK this brand. Boycott. pic.twitter.com/3XrgRnYOYjJune 3, 2020

Further compounding matters, Fuller subsequently replied to a customer email, “I am begging you to sell your pedals because you actually don’t deserve them.

"You are actually so racist that you believe the Good people who are protesting are the same as the Organized gang banger criminals who are looting ‘store fronts’.

“Those ‘store fronts’ are good hardworking people’s lives and livelihoods. I’m [sic] fact if I see you with a Fulltone pedal I will tag it and break into your house and loot it from you, because its my free expression to do so… right?”

Inevitably, this reply was widely shared and the social media firestorm intensified.

Now, Fuller has issued the below apology and statement.