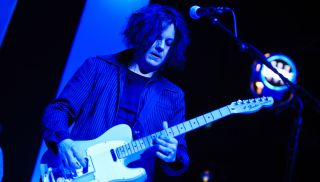 Jack White is a modern day guitar hero and during the early 2000s, he and Meg White gave rock and roll a shot in the arm with The White Stripes’ lo-fi, amps-up-to-eleven, raucous rhythmic numbers driven by distorted guitars and icky-thumping beats.

5 guitar tricks you can learn from Jack White

Since then, the guitarist and front man has been involved in a number of projects like The Raconteurs and The Dead weather while also working on a number of solo albums.

The enigmatic Detroit native is responsible for inspiring an entire generation of garage rock bands and for those looking for even more inspiration, look no further than these five songs that every guitarist needs to hear from one of the greatest guitar players of the modern generation.

For the general public, this may have been the very first time anyone had heard the growling, rebellious, garage rock duo of Jack and Meg White. It’s the very first song in The White Stripes’ self-titled debut album.

Upon listening to this track now in 2020, the introductory, fuzzy notes immediately bring to mind another two-piece rock band, from Akron, Ohio with similar tendencies, but Jack only teases the blues before sliding a bit higher into the fretboard and completely exploding (pun intended) into a very heavy riff that is completely his own.

Everything he plays in the entire song is theoretically fairly simple but is embedded with classic White grit and energy. It’s not until halfway through the track that things begin to slow into a chugg.

This is a key White song because of the sheer variety of play presented here; from the heavy licks, riffs, and the up and down tempo is a great exercise for any beginner or experienced guitarist.

With Jimmy The Exploder, Jack plays with the essence of blues without actually jumping into the Mississippi, but with this standout from The White Stripes’ sophomore album, he takes Son House’s Delta blues and dives into the deep end.

White electrifies the original riff while adding a number of flourishes. In the documentary film, It Might Get Loud, White says that he heard Grinnin In Your Face by Son House when he was just 18.

It's clear since that first epiphany the late bluesman has become a major driving force in Jack White’s music. White has been known to be a scholar of early blues and it is without a doubt that Death Letter is a paean to the genre that influenced the majority of his playing.

The Delta-born style is further exemplified in this track thanks to its use of a slide alongside big, nasty licks that go from ear-piercing to low dribbles of the blues. It has been said that the band simply recorded this song live without any overdubs. A testament to both Jack and Meg’s chemistry, and kudos to the rich guitar tones at play here.

There are a number of bite-sized notes that crawl up and down the frets before leading into the crunchy main rhythm but it’s hard to believe the track is bit over four minutes since it feels like a faster song with a two minute length.

But perhaps it feels brief simply because of its sonic diversity and the jangling, driven guitar that goes from Led Zeppelin to Bo Diddley seamlessly. Like so many of the other tracks from classic 'Stripes, the guitar riffs play right on the downbeat before completely breaking down into the screeching train of White’s lead melodies.

The Raconteurs were the first big project for White away from the White Stripes, and with their well-received 2006 debut album Broken Boy Soldiers came hits like Steady, As She Goes and Hands.

White shares writing responsibility in the four-piece with co-vocalist and guitarist Brendan Benson. The latter took the lead on writing Somedays (I Don’t Feel Like Trying) and it's a great example of a writer used to having a lot of creative control working well with others.

On the Spotify track-by-track commentary for last year's comeback album Help Us Stranger, White gave insight into his approach for the song; "I mostly attacked this as a guitar player. I was using a new B Bender Fender [Telecaster] guitar. This is a guitar that when you push the guitar away from your body, the strap pulls a lever that makes only the B-string bend so it sort of sounds like a pedal string guitar.

"If you listen to my guitar on that song you'll hear more of a country western guitar. I worked really hard on the guitar parts for this track because of that B Bender."

You may also notice the song also has riffs that sound inspired by Lynyrd Skynyrd’s “Tuesday’s Gone” and The Beatles’ “I Want You (She’s So Heavy).

The fifth song from White's second solo album is an instrumental that should reassure any fan of White’s early 2000s material that he isn't shying away from the loud and ragged riffs that elevated him to prominence.

The opening moments of the song feature a steel guitar going into a reverse pedal, which plays the notes backwards, alongside a fiddle and of course, White’s electric guitar, amongst other instruments.

This song, more than anything else, is a statement of intent for White as he reaffirms his legacy as a member of the rock and roll pantheon of modern day guitar heroes.