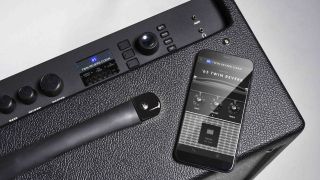 Fender will release the third iteration of its free Fender Tone app on 16 April, further enhancing players' ability to dial in thousands of preset tones on the company's compatible amps – including the Mustang range that we're big fans of.

There's 39 different amp types and 73 effect models to choose from and twea. Players can then share and download presets with other users.

Tera Melos guitarist and singer Nick Reinhart has already been trying out Fender Tone 3.0 with his amps and it's had a direct effect on his creativity as an artist.

“The ease of accessing so many different sounds in a real guitar amp is incredible and you have everything you need right at your fingertips," says Reinhardt. "I’m able to focus on being an artist and much less on the logistical part that can take up so much time - like building a pedalboard, or hunting down the right guitar amp.”

For more information on compatible amps, head over to Fender.com