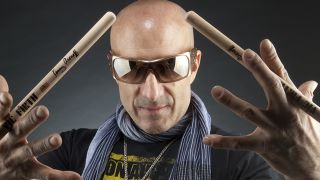 As always, I hope this blog finds you well. I don't know about you, but after a no doubt "relaxed" schedule over this UK Bank Holiday, there's nothing better than a kick up the Juicer to get us all back on the health wagon and being mindful of our choices

I continue to be extremely lucky with health-minded drummers who want to contribute to this blog series.
Like with fishing, if you wait long enough you'll eventually catch one… Friends, let's just say, "We're gonna need a bigger boat!" WE CAUGHT A BIG ONE!

In addition, he has played on over 30 (YES, THIRTY!) Grammy-nominated recordings. Friends, I give you…. KENNY ARONOFF!

"I feel amazing after I have this drink.. I fell into it when I recently did a liver cleanse. It required I drink 8floz of apple juice through the day...I also try to have a vegetable juice later in the day. Thirty minutes later I will have a Protein shake."

1) Eat as well as you can! Lots of fresh vegetables and some fruit (don't over do it because fruit is high in sugar), lean and organic chicken, fish and some red meat. I mostly eat gluten-free products for many health reasons. NO PROCESSED FOODS AND NO SODA EVER!

2) Supplements - as organic and well made as possible… (Multiple vitamin, lots of Omega 3 fish oil, lots of vitamin D to prevent flus & other illnesses, I take 1,000 mgs of C, CoQ-10, Zinc). These are a few supplements I take... Each one has a purpose and is helpful because I travel so much.

3) Cardio exercise - keeps you in shape and healthy. Helps keep your hormone levels up which helps prevent diseases.

4) Weight lifting (you don't have to do heavy weights). Keeps you in shape and healthy. Helps keep your hormone levels up which helps prevent diseases.

6) Eight large glasses of water at least each day. Water is the number one nutrient our bodies need to live.

We are all heading towards heart disease or heart attacks, diabetes and cancer. Most everyone will get one of these unfortunate diseases especially because we are living longer. My way of life is that being HEALTHY is the most important thing you can do each and every day. When your health is bad, you cannot do what you need to do, or love doing every day at the level you want.

Coconut oil (instead of nuts for good fat)

"I drink coffee, so sometimes I will add two shots of espresso to my shake."