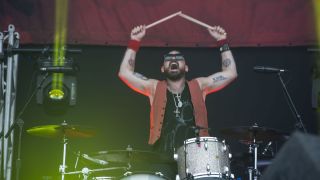 Michael Miley has become a real drum hero in the last few years. Want proof? Well, how's about his band being handpicked by Ozzy Osbourne to support Black Sabbath on their farewell world tour? Yeah, that oughta do it.

We caught up with Miley and got the lowdown on that, his band's album Hollow Bones and his switch to Gretsch.

You've been supporting Black Sabbath on their last ever tour, how has that been?

"It's an honour, handpicked by Ozzy to be the direct support worldwide on the final tour of Black Sabbath, what more could you ask for?"

What have you learned in your drumming from supporting Sabbath?

"We've opened for so many big bands and we literally go to school every night. They're the kings of arena rock, we've opened for AC/DC, Aerosmith, Judas Priest, Deep Purple, Slash, Lenny Kravitz, KISS, so we get to see how the big boys do it.

"But the thing we find is that people are nice, you get to a higher level and you don't have to be a jerk! So we've been treated really well, especially by Sabbath."

You've just changed to Gretsch drums, having played Mayer Brothers for many years - what prompted the change?

"Gretsch was always my favourite drums growing up, classic name, a classic sound, DW took them over and they're like a super-company again. And I always told myself if I'm ever going to leave Mayer Brothers it would only be for Gretsch.

"So the move just makes sense, I'm getting supported all around the world, we're playing dates all over the globe right now, you need that support on the road."

The new album Hollow Bones has a brilliant classic drum sound, has that always been a priority, to get an 'old' sound for the drums?

"We have from day one, we've been using that same [Glyn Johns] three mic technique, nothing's over-thought with us. We don't over-think, we write in the studio. I'm making up grooves as I'm hearing the riff for the first time and he's rolling tape, so we can hear on the album there's a first, second, third take of me first hearing the riff, so we don't rehearse the song.

"Okay, verse chorus, verse chorus, guitar solo, double chorus, and we'll do that ending thing and hopefully we'll get it [laughs]. It's like we just go for it. So that's why our albums have that raw, organic, feet in the soil, soil under the fingernails, working man quality."

What is your favourite drum track from the album?

"I love Thundering Voices. My goal going in as a drummer - I'm not writing chords and lyrics so I want to introduce feel. We're all into black American music. We're into soul, Motown, r'n'b, rhythm and blues, old blues, funk, James Brown, Otis Redding, Sam Cooke, black American music that all the British Invasion bands sort of ripped off. I wanted to insert some more funkiness.

"Thundering Voices is one of my favourite beats I've come up with in the band, and it sort of just came out of me. I didn't think, 'Oh I'm doing Swiss Triplets right here.' It's a really complex hi-hat part, outside of the open hi-hats there's a lot of Swiss Triplets on the snare, sort of Dave Garibaldi on steroids."