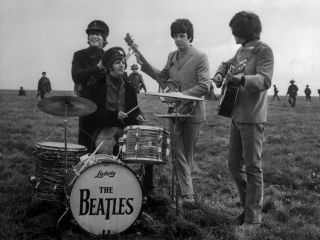 Ringo Starr has received a lifetime achievement award at the 56th annual Grammy Awards - along with Paul McCartney - for his work with The Beatles.

Ringo and Paul reunited on stage at the glitzy awards do to perform Queenie Eye from McCartney's most recent album, the first time the pair had publicly performed together since Ringo's 70th birthday bash in 2010.

Ringo also performed his solo track Photograph from his 1973 album Ringo, though he was not on drums. Backing the drum legend was former Rhythm columnist and rock session great Kenny Aronoff.

The Grammys chose to honour the Fab Four ahead of an anticipated Grammy special, The Night That Changed America, in honour of the 50th anniversary of The Beatles' first appearance on US TV, on The Ed Sullivan Show on 9 February 1964.