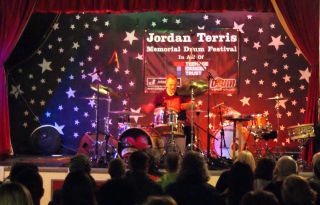 Mark Richardson at the kit during his set

Some of the UK's finest drummers took time out of their busy work schedules to support a charity drum festival in Nuneaton, UK on 24th February 2013.

It was hosted by former England footballer and inventor of the Dube percussion instrument, Dion Dublin.

The audience were in for a treat: The drummers played a wide range of music, from mellow jazz to full on rock music. They talked about their routes to success and gave out wise words of drumming advice.

There were many highlights to the five hours of drumming demonstrations, including a drum battle between Cherisse Ofosu-Osei and Emily Dolan-Davies, and Mark Richardson's powerful, roof-raising grand finale made an exciting climax to the day.

The well attended event, which raised £3000 for the Teenage Cancer Trust, was organised in memory of Jordan Terris; a talented local drummer who died of cancer in 2007 at the age of 15.
His mother Fiona and his step-father Kevin, who teaches drums, wanted to mark Jordan's 21st birthday year with a celebration that would benefit the charity that improves the lives of teenagers and young adults with cancer.

They had previously organised a similar festival in 2010, which featured the likes of Steve White and Craig Blundell. Buoyed by the success of both shows, and thanks to the generosity of more top UK drummers who have already pledged their time, they have started making plans another show in 2015.