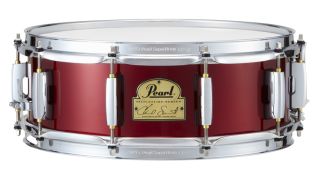 He's the superstar drummer for the Red Hot Chili Peppers, a host of his own podcast interview series, an advocate for music education in schools and, of course, a doppelganger of Golden Cowbell winner Will Ferrell. And as a loyal Pearl player for over 20 years, Chad Smith continues to innovate with new additions to his signature line of drums.

Smith's latest collaboration with Pearl comes in the form of two new signature snare models, each with its own task-specific tonal voice.

The first is the Chad Smith Limited snare (CS1450R, shown above). Its Candy Apple Red lacquered finish delivers added tonal control to Chad's trademark 14"x5" 1.3mm steel shell snare. "This is a drum for any occasion," says Chad. "The classic Chad drum is getting a facelift!" Available only for a short time at the special suggested "street" price of $469US, Chad's new Limited snare is a drum that takes recording 'in the Red' seriously.

The new Chad Smith Free-Floater snare (CS1465F, shown below) is a crowning achievement in true percussive perfection. Taking its name from the Latin term meaning "I Came, I Saw, I Conquered," the drum's three interchangeable 3mm cast rings (two of brass, one of steel,) are housed in Pearl's Free Floating snare frame. This not only allows for multiple tonal combinations when stacked in different order, but also for total resonant freedom from attachment hardware. "I've finally found MY sound," Chad proclaims. "Three rings of power! This one does it ALL!" Only 50 pieces will be available in the USA at a suggested "street price of $959US.