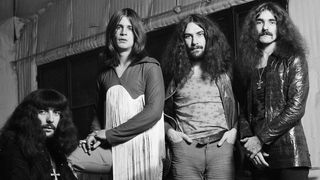 Black Sabbath back in the day (Image credit: Tony Frank/Sygma/Corbis)

Ozzy Osbourne has continued to put the boot into Bill Ward, saying that the drummer turned up for Black Sabbath's reunion looking 'like an old guy.'

In an interview with Classic Rock, Ozzy also criticized Ward's weight, suggesting the drummer's condition was key to his absence from Sabbath's reunion.

Ozzy said: "Here's the bottom line: being a drummer is the most physical part of any band. And when Bill turned up, he looked like an old guy. I don't think he had the stamina to play for an hour or so on stage.

"If I'd had a heart attack like Bill had, I'd go, 'F***, I'm going to lose some weight.' I train — I work my arse off. So you can't expect someone who's been sitting on their f***ing arse, eating s***, to come along and go, 'Equal split.' It's insane. I honestly don't know what went down with that deal, but I suppose it's something along those lines. There wasn't any other reason.

Sabbath's new album 13 is out now.