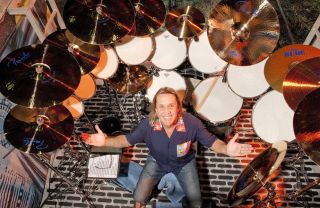 Nicko McBrain has hit out at the Slayer and Black Sabbath drum situations.

Slayer last week announced they would be touring without Dave Lombardo, while Sabbath have recorded their new album with Brad Wilk, rather than Bill Ward, at the kit.

McBrain told the Broward Palm Beach New Times: "Most of the issues that pro musicians have sooner or later boils down to the royalty cheque or performance royalties.

"When you look at something and say, 'Could you explain this to me, why we're not getting what we should according to these numbers?' and somebody says, 'F***ing shut your face or you're fired' - it tells you there's an alarm bell going off.

"You have to ask yourself this: How did Dave Lombardo get the information that led to this problem? Who gave him the financials, if he wasn't on top of it with an accountant already?"

Turning to the Sabbath situation, Nicko added: "The Bill Ward story, I understood that Sharon Osbourne got her fangs into that one. It's beyond me - Bill Ward was the original freaking band member, you know? It just doesn't make sense to me."