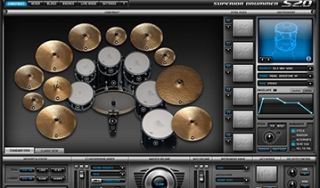 Superior Drummer 2.0 builds on the success of EZdrummer.

Toontrack will use the 2008 Winter NAMM show to launch its all-new Superior Drummer 2.0 software. This is set to be a more advanced version of its popular EZdrummer application.

Superior Drummer 2.0 will replace the now discontinued dfh Superior in the Toontrack product line. This high-end acoustic drum solution was held in high regard, but wasn't quite as intuitive as some its rivals.

Thanks to a new interface, Superior Drummer looks a much simpler proposition than its dfh predecessor. This bears some similarities to the EZdrummer GUI, put packs in a number of additional 'power' features, too.

Extras include an ADSR envelope and an internal mixer that features effects from plug-in specialists Sonalksis. These include a 5-band EQ, a high/low-pass filter, a gate, a compressor and a transient designer.

Other notable features are the ability to load all dfh Superior and EZdrummer sound libraries, faster loading times and more effective use of sample layers.

Available for Mac and PC, Superior Drummer 2.0 will be available in the first quarter of 2008. The full price will be $349/€249/£166, though reduced upgrade/crossgrade prices will be offered to users of other Toontrack products.