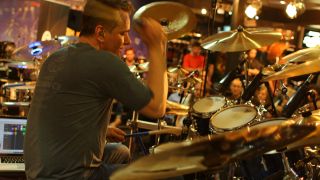 It was standing room only at Wembley Drum Centre as the drumming faithful gathered to marvel in wonder at Gavin Harrison during his Zildjian clinic tour.

Harrison kicked off the evening with Porcupine Tree's 'The Sound of Muzak' before busting out some jazz fusion. The performances were interspersed with Gavin taking questions, which led to revealing explorations of different facets of his playing. Gavin discussed his approach to fills, saying that he never wants to be someone that people can air-drum along to. One way he stays fresh is to play games with himself - for example when a break is coming up, he will decide that the fill has to include flams and a triplet. Or the fill might have to include the low frequency instruments, like the floor toms, and high frequency instruments like splashes and bells. Then he can improvise the fill with those elements in mind so he always has a concept around which to frame his playing.

Asked about playing double kick, Gavin replied that he leads with his right foot as he finds that much simpler when playing odd times. Furthermore, he always plays single strokes, believing that doubles only make sense with two distinct sound sources. Similarly, in response to a question about strengthening his left hand, Gavin explained that he does not feel that he needs his hands to be mirror images of each other as they have different roles to play.

Gavin briefly stepped away from his gorgeous Sonor kit to demonstrate Zildjian's new Gen 16 electronic cymbals while one topic that proved fruitful was creating drum parts. Gavin discussed being inspired by Steve Jansen of the band Japan and the vital importance of where you place the backbeat, illustrated with a breakdown of 'Bonnie The Cat'. Another highlight was a performance of Porcupine Tree's 'Cheating The Polygraph' arranged as a big band swing number, which was just as mind-stretching as it sounds. Throughout Harrison stressed the importance of determination over talent as the key in any drummer's growth. An inspiring evening with one of the UK's most innovative and articulate players.