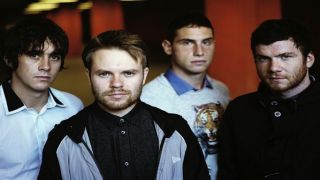 They may have recently put on a storming, bill-topping performance at Glastonbury, but Arctic Monkeys are the worst festival headliner, according to Enter Shikari drummer Rob Rolfe.

In an interview with Gigwise, the sticksman was asked to pick the worst festival closer that he has ever seen, answering, "Arctic Monkeys. I'm not a big fan of them anyway, so maybe I'm quite biased."

When asked what makes a great headliner, he added, "You need good production - sometimes I feel a bit cheated when a headline band don't have any production. You've got to put on a good show."

Rolfe may not be keen, but MusicRadar users love the Monkeys, recently voting them the tenth best live band in the world.