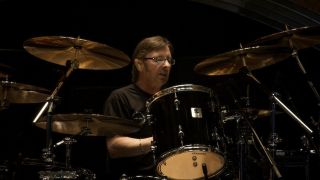 Rudd at the kit for AC/DC (Image credit: Michael Hurcomb/Corbis)

Phil Rudd has appeared in court again in New Zealand, but it's fair to say the AC/DC man didn't make the best impression.

Arriving late at the court to face charges of making threats to kill and possession of cannabis and methamphetamine, Rudd entered no plea. On departing the court, he had time to give a middle-finger gesture to reporters before leaving the scene, and in doing so he almost caused a crash as he reversed into the path of an oncoming truck.

Shawn Drover has quit his long-held position as Megadeth drummer.

In a statement Drover said, "After 10 years, I have decided to quit MEGADETH to pursue my own musical interests.

"I want to thank Dave Mustaine and the entire MEGADETH family, as well as thanking all the amazing MEGADETH fans around the world!!! I truly appreciate all of you.

"Stay tuned for info on my next musical journey."

So what's next for Megadeth? A return for Nick Menza in time for a 25thanniversary Rust In Peace tour? Hmm...

Finally, it looks like being another busy summer for Lars Ulrich as Metallica have been announced as headliners for the 2015 Reading and Leeds festival. It's also thought that the band's long-awaited new album could also drop next year.