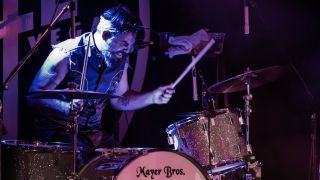 "My attention span is so limited that I get bored," Rival Sons drummer Mike Miley tells Rhythm. "I love AC/DC and I will rock out for a couple of songs but I can't listen to a whole album of simple drumming. I love Skrillex, I love Tony Williams with Miles Davis."

After watching Miley killing it on stage with Rival Sons, we know exactly what he means. Miley certainly isn't one for sitting back and laying down a straight 4/4. Instead, he channels Moon, Bonham, Purdie and more as he deftly mixes raw power playing with virtuosic groove. As we chatted with Miley we wanted to know exactly where this bombastic style came from, so we asked him to talk us through some of his drumming idols.

Ringo Starr was my first and foremost influence. He was the drummer of the greatest songwriting team ever. John Lennon saying that Ringo wasn't even the best drummers in the Beatles, that was just a cheeky comment. Without Ringo you don't get those lyrical drum fills. Who benefitted from that? Don Henley from The Eagles, Nigel Olsson with Elton John, Nick Mason, all of those lyrical guys. None of that would exist without Ringo. If I ever met Ringo I would probably pass out and need to be revived.

My first funk lessons were via videos of Clyde Stubblefield. I got obsessed with the drummers of James Brown. Those drummers are the forefathers. Same with Bernard Puride and his early work with Aretha Franklin. These guys are the roots of funk drumming and it graduated into the more technical funk drumming of David Garibaldi. I got to study with David Garibaldi for a summer. I would just go to his hotel room and we'd hang out.

Mitch Mitchell was one of the first funk drummers too, no one was playing like him. Mitch Mitchell is so instrumental in funk drumming. We can analyse it until the cows come home, but 1967 to 1971 was the time when funk drumming blossomed and then you had jazz fusion coming out in the mid 70s all the way into Fool In The Rain, where Bonham was borrowing from Purdie. We all borrow from each other, and we steal too. Duke Ellington said great artists steal, mediocre artists borrow. If you're not ripping somebody off then you suck!

Tony Williams should be the example of every young drummer that wants to be successful. Tony Williams learnt every single drum lick on every single Miles Davis record so that when he auditioned for Miles he knew more about the music than Miles did. Tony had the chops and the snare drum technique, he is easily in the top five greatest drummers that ever lived. You have him, Buddy Rich and then the list goes from there. In my opinion Tony is hipper than Buddy. Buddy was angry and military and everything was perfect, Tony had swagger. I sat with my head right next to Tony's bass drum on his last time through LA. He had the big yellow Gretsch kit and gigantic cymbals. He was hitting so hard. I was driving home and my ear hurt, I put my finger in my ear and there was blood. I went to the specialist the next day and I had a minor tear in my tympanic membrane - Tony Williams tore my ear drum! I have a scar directly from Tony Williams. He died the week before he was due to come through LA again and I had a ticket to see him there. He was playing at the Catalina Bar and Grill and they said somebody would sit in as a tribute to Tony, it was Roy Haynes. I got goosebumps saying that. Roy gave a eulogy, I saw Roy Haynes give a eulogy to Tony Williams. Wow. It gives me chills.

Buddy is the greatest of all time. Tony is my favourite, but Buddy was the first guy to own it and he has never been equalled. He had the fastest single strokes, he played the rudiments better than anybody. He could play everything with his right and left hand. He was as close to perfection as you can possible get. Buddy would swing so hard. He had great tone as well with his drums tuned high, I could talk about Buddy all day.

And some kind words from Steven Tyler

Steven Tyler watched us from the side of the stage and said my playing reminded him of Bernard Purdie. Dude, I almost cried. That meant so much. Steven Tyler is a white James Brown, it's ridiculous, he's super talented, he sat behind my drums as well. I angle my drums down so that kind of messed him up and I have a big wide open 26" kick. A lot of drummers don't know how to play my kit. It's funny to see a bad ass drummer at my kit because they're like, 'Dude, what are you doing?!' But you could tell when Steven sat down that he can play.