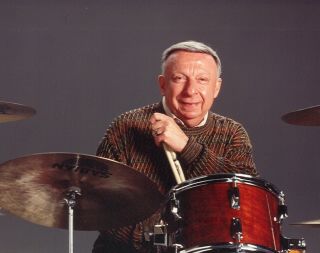 Rhythm was saddened to recently learn of the passing of Pro-Mark Drumsticks founder Irvin 'Herb' Brochstein.

Below we have published ProMark distributor D'Addario's reaction to this news.

Launched in 1957 with just 1,200 drumsticks, the Pro-Mark drumstick company came to define the ultimate sound and performance for top drummers around the world. Aside from his drumstick success, Mr. Brochstein was multi-dynamic throughout his long music career of recording and performing, teaching, and owning a drum shop.

After he bought a few pairs of drumsticks made out of Oak from a passing salesman, Mr. Brochstein's interest in sticks took hold. Noticing their superior performance over sticks made of traditional materials, he began selling the sticks to his students as well as traveling drummers passing through Houston. The company name, Pro-Mark", means "the mark of a professional."

Acquired by D'Addario in 2011, Pro-Mark still operates as a family business based in Houston. Exporting to 110 countries around the world, their products are endorsed by top current drummers from from Rush all the way to Radiohead.

"I had the privilege to know and work with Herb Brochstein in the early 1980's. Herb was a mentor and friend throughout my career. We at D'Addario look forward to continuing to build on Herb's goal of providing the best quality sticks available" stated Rick Drumm, president of D'Addario

Services were held at 1:00 PM on Sunday, January 20th at Emanu El Memorial Park. In lieu of flowers the family requested donations be made to the Houston Humane Society.