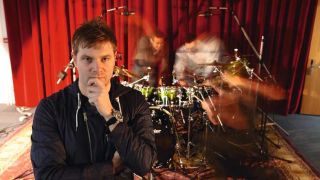 You might think that drumming workaholic Craig Blundell already had enough on his plate, but at the turn of the year he took on a brand new, hugely challenging gig with a revered 21st century progger.

The call came from Steven Wilson, he also of Porcupine Tree fame, as he sought out a new drummer for his solo band, as previous incumbent Marco Minnemann will step away after the first leg of the band's upcoming tour due to clashing commitments, with Craig taking over in May.

Craig picks up the story: "I was away at Christmas and I got a text message from my producer friend John Mitchell saying that Steven was looking for a drummer to take over after the European leg of the world tour. I was in the frame after he'd seen some footage of me online."

With his foot in the door Craig met up with Wilson at a Berkshire studio for an audition, and the drummer was typically well prepared.

"I've been to countless auditions but I was pretty nervous about this one. I had a lot to learn in a relatively short period of time, so I charted out the tracks a couple of days before and played through them several times at my studio. I prepared three versions, simple, busy and full on takes just in case, as I do for recording I'm really glad I did."

As a keen progger it seems the gig is something of a dream for Craig.

"I've been a fan of Steven's for many years. I spend most of my time playing progressive material with bands like Pendragon and Frost* and countless others, I've always wanted to work with him. He's extremely well respected globally, it was a no brainer when I was asked. But it was a little bit daunting. Steven had sent me the new album which blew my mind, I'm a fan too so I was keen to see what he'd come up with, its was incredible, Marco Minnemann's playing, as always, was utterly sublime."

Of course this being Craig Blundell, who also juggles an R&D position with Roland, this isn't the only gig he has on the horizon. In fact 2015 looks absolutely jam packed.

"I'm recording an album early march with members of King Crimson and Van Der Graff Generator which should be fun, I've heard the material and its a bit of a play... I also I have a load more to do at the BBC in March. I set up my studio at home this year and I've been playing for a lot of record companies and producers, that has been a lot of fun."

Think that's enough for one man? Not for Craig.

He continues: "My second Dr oKtopUs album and my book is still a work in progress but it won't be long. I'm away with Steven Wilson from May so there's lots to cram in before then including shows at Frankfurt Music Messe, another trip to China and some one of Europe clinics and drum festivals."

Let's hope he finds some time to sleep somewhere amongst all of that lot.