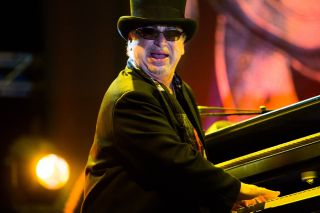 In the February 2014 issue of Rhythm, on sale now, our monster cover feature presents the stories behind 10 of the most iconic drum sounds ever recorded, and we show how you can create them yourself, with audio and video examples, mixing techniques, miking ideas and more!

As part of the feature we spoke to some of the drummers, producers and engineers involved in the tracks to add their expert take on things. We got so much information we couldn't fit it all in the magazine, so here we present some bonus material - deleted scenes if you will.

Do you remember which studio and room it was recorded in? Had you recorded drums there before?

"I remember, first of all, we were in Sunset Sound in the big room, which I think is Studio One. That's a great room. It's not too big and not too small and it's got really good acoustics in it. Al Schmitt was the engineer, who we'd worked with before, and I had hired to do the rhythm tracks recording for the Toto IV record."

What mics were used and where they were placed around the kit and in the room?

"I think Al used a pretty simple miking technique, which was pretty standard at that time, which was a kick drum mic, a hi-hat mic, a snare mic, two overheads and I think he had mics on the individual toms. I think they had mics on his three toms and I think he had something like an SM57 on the snare drum, some kind of condenser, maybe a [Neumann] KM88 on the hi-hats, and the overheads at Sunset were usually either [AKG] 414s or they had these great microphones at the time called [Sony] C37s, which we used to use a lot. We used to work at Sunset so much and I've seen Jeff's kit miked so many different ways there, so I'm just giving you my memory of what it possibly was."

What do you remember about the drum session for Rosanna?

"I was on piano and I think he and I cut the track with Lenny Castro. So it was the three of us together and then we started overdubbing the other players on it. Originally, when I'd bought the 'Rosanna' song in, I'd imagined it in my head - I'd been listening to a song way back in the day called 'Panic In Detroit' by David Bowie, and that had a standard Bo Diddley beat. So, if you can imagine, [I had] the verse and the intro starting out with a Bo Diddley drum beat and Jeff immediately went into the beat that you hear on 'Rosanna' on the intro. And I mean, immediately. He later selflessly described that beat as a combination of [Steely Dan drummer] Bernard Purdie's beat from 'Babylon Sisters' and John Bonham's beat from 'Fool In The Rain'.

"So you hear it there and then in the 'v' sections you hear us go into what we called a Thom Bell/Spinners/O'Jays kind of beat, which was this almost double-time cross-stick beat that was very Philadelphia [in influence]. Then the chorus, again, pure Jeff Porcaro. We played through the song and then at the very end we broke down and went into a kind of a second line New Orleans/Little Feat groove, because Little Feat had been working in that studio a whole bunch and we were big fans of that band, so that was our little tribute to those guys."

Was anything special done at any stage to ensure the individual nuances and ghost notes of Jeff's shuffle stood out?

"It's a funny thing, because the ghost notes were never really supposed to be heard - that's why they're called ghost notes - but so many times you hear people playing that groove and you hear the ghost notes really loud and they sound like the guy's playing a triplet shuffle. Basically, what you're supposed to do is hear the bass drum and snare drum and mainly the hi-hat beat, the ghost notes were just Jeff keeping time [relatively] silently, but there are those ghost notes there. It was very important for him to hear those just a little bit, as that was kind of unique to him."

How much of the sound would he say is down to the studio itself vs Jeff's touch and dynamics, how his drums were tuned, the drums sizes he selected etc?

"I think it has a lot to do with Jeff and that personal kit. The room had such a great sound. It's a medium-sized room. It's not huge like Abbey Road is huge and it's not small like some of these small box studios, where it's the size of a garage. It's a nice medium size, it's got a slightly higher ceiling and it's not dead, so there's a little bit of room sound there. I know Al would always have a couple of mics in the middle of the room for room mics, so there's a little bit of ambience, but it's very much us hearing Jeff Porcaro the way he used to tune his drums and play them. If you were standing right next to him, that's pretty much how it sounds.

"Then of course you've got Greg Ladanyi, who was one of the greatest mixers of all time, mixing it. Greg would get in there and he wouldn't be afraid to twist the knobs off some EQs. So you had Al Schmitt, who's very minimal when it comes to EQ, who pretty much lets the player and the instrument get their own sounds and keep it pretty natural, because he comes from jazz and classical. And then you have Greg Ladanyi, from the school of 'whatever it takes to make it sound fat and rock 'n' roll' twisting the knobs off some API equalisers in that room at Sunset!"

What were his impressions upon hearing the finished track for the first time? Did the drums stand out to you?

"I just got a big smile on my face. We knew that we had a great track. A lot of times when I write songs, I've already made the record in my head, so I'd been hearing this record in my head, but as we started getting the instruments put on, we knew that we had a solid track there. We've done it so many times where we've had solid tracks and it's one of the best feelings in the world - other than playing live onstage -it's what we call 'nailing' the track. When you nail the track like that, we just know in our hearts that we'll play it once or maybe twice and that'll be it. Everybody looks around the room and we smile and go 'that's got the magic on it'."

Were you quite open about complimenting each other when you nailed a track?

"Yeah, but it was more in our body language. We'd smile and high five each other like athletes do when they make a field goal or something! Or there would be some subtle, minimal words of compliment. I think a smile was worth a lot in those days, someone would be shaking their head smiling and high-fiving you. That's about as big a compliment as you could get from our little group!

"I remember later on, I was probably more vocal about it, as looking back you'd be like, 'He really nailed the hell out of that groove'. But listening, you'd just look up at the speakers and smile -that's how a lot of those compliments were given in those days. Hey, good question!"

Want your drum recordings to sound like Jeff Porcaro on 'Rosanna'? Find out more in the latest issue of Rhythm.