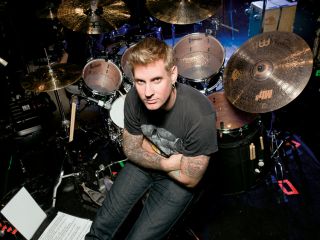 Mastodon are finishing up work on a brand new album, and Brann Dailor can't quite put his finger on where the hell the new material came form.

He told Loudwire: "It has some elements from all the albums in there, but then there's lots of new stuff that I don't recognise at all. That's usually what we are really looking for, you know? There's more of a surprise for ourselves and for fans. I, sort of, imagine people listening to it and either being absolutely horrified or absolutely loving it [laughs]. Like, 'Oh my god, what is this?!'

"We were listening to some of the songs last night and there's a couple where I don't even know what planet they're from. I really couldn't tell you what the f*** is happening. It's really bizarre. It's f***ing weird and we're excited. It's exactly what we wanted, but there's also very big rock heaviness in there as well. I hope everyone likes it, we like it a lot.

Dailor adds that while he's aware that not everyone will like the record, he's happy with the reactions that it is likely to bring.

"That's where we're at right now. Where we're just like, gasp! On pins and needles listening to every song. I like it. Even if you don't like it, you'll think it's strange and that's enough for me."