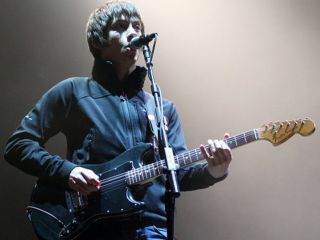 Queen Monkey: Alex Turner and Josh Homme are to work together

Josh Homme has confirmed that he is to produce new songs for Arctic Monkeys.

Homme said the Sheffield quartet would travel to the Californian desert in September to "submerge themselves in something else and do some tracks."

"That's the sort of pressure-free, 'Lets do something cool' environment that really pays musical dividends at the end," Homme told the BBC. "They're a talented bunch of guys, it's gonna be a lot of fun."

Arctic Monkeys' drummer Matt Helders said in July '08 that the band's forthcoming third album would be their "heaviest" yet.

"Not 'heavy metal' heavy - just more aggressive", he explained. "We're all into Queens Of The Stone Age. When we got to play with them and see them live it gave us a kick up the arse. They are an inspiration. They show you can still have top tunes and loud, heavy songs, too. It's a lot more fun playing loud music - simple as that."

Helders also said he hoped his drums would be to the fore. "I've been trying to think of beats I can do to start the record off. Of course I want to start off the album with drums - it's an ego thing."

Whether the Homme-produced tracks are intended for the album itself, it is not yet clear. Arctic Monkeys have already demoed a series songs for the album themselves, but have previously hinted that Simian Mobile Disco's James Ford would produce the record.

As Homme once said: No-one knows... But it's an intriguing collaboration.