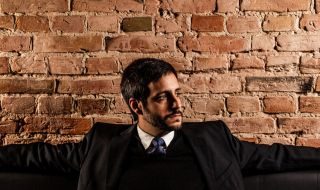 DJ EXPO 2014: Canadian born, now Berlin based, Noah Pred is a rising star in the dance music fraternity. His widely acclaimed Era One CD highlighted his mix skills alongside his production savvy, not to mention the exciting, eclectic, electronic roster of his Thoughtless music imprint.

Thoughtless are soon to release Third Culture (Remixed), a re-imagining of Pred's excellent artist album from last year, which makes this a good time to catch up with him before he's flooded with gig offers and press soirées.

Always in demand for his remix abilities and floor filling DJ talents, Noah gives us insight into the finer nuances of his art whilst impressing upon us the importance of understanding the fundamentals of DJing.

What's your essential DJ kit, and does it differ from your production kit?

"It does because I strongly dislike taking my laptop to clubs. I rely entirely on Pioneer CDJ2000s or whatever the club's (preferably networked) CDJs are when I play out. I use Pioneer's Rekordbox software to organise everything on my USB stick, and it's so great to just show up at the club with headphones, the USB, and have thousands of tracks ready to choose from.

"It's good to still have the tactile mixing interface that retains the kinetic energy produced by the risk of things not being synced. I think that whether people pick up on it or not, there's a certain excitement when things could, potentially, slip out of control."

Do you rehearse your sets?

"When I moved to Toronto, around five years ago, I sold my turntables so I've not had a DJ rig at home. I sometimes fire up Traktor to see if certain tracks go together, but typically I don't rehearse. A good friend who lives near to me in Berlin has some CDJs now so I've gone over there a couple of times mainly to have fun rather than practising.

"The main thing for me is to get acquainted with the music - learning the ins and outs of the songs - because I feel like I'm under an avalanche of new music. There's a certain rush to playing tracks out you haven't played before, and finding mixes on the fly; just letting the magic happen that comes from not having everything completely planned."

Are there any secrets to working a room?

"If you're not confident in your [music] collection, things are going to be difficult so you have to curate well. Once your collection is curated, know the ins and outs of the tracks so that you can string them together in a way that makes sense - that's the narrative you'll work into things.

"Along with all the technical skills you'll pick up through practise, then it's about being receptive and aware of what's going on around you and tailoring your music to the moment in hand. That 'moment' is also going to change every night, and certain mixes will go down well no matter where you play them while others won't. You have to determine what the crowd is hungry for and then keep going with the shifting mood throughout your set.

"I wrote a piece on the art of DJing for an academic journal last year where I broke the process of DJing into three components: curation, narration, and improvisation. I was trying to provide people with an understanding of what's required for DJing. I wanted to give them an understanding of the core elements beyond the technical."

You got a lot of attention for your blistering Era One mix. When putting together a mix for release, what are you looking to do?

"Timely that you mention the Era One mix as we'll be releasing another instalment in that series this Fall. Thoughtless has 50 releases, so I wanted to highlight a lot of what we've done on the label. It's like a mega mix, and not something I'd normally attempt to do for a podcast.

"The approach was to get all the candidate tracks together in Ableton Live, warping them and everything, but I elected to use the Repitch mode as it's the highest audio quality in Ableton but also it made me feel that, theoretically, I could mix it that way live if I had all the tracks queued up in the right order. I tried to keep effects and looping to a minimum as I wanted it to be a feasible mix. Although, being a perfectionist, I want it to hold up to multiple listens and stand the test of time.

"Once I had all the candidates ready to go it was an intuitive process from there, as DJing live should be for the most part."

Have you any pearls of wisdom you'd care to share with aspiring DJs reading this?

"Just those three things: curation, narration, and improvisation. Within that, don't rush out to play gigs just for the sake of playing. A lot of people are rushing into becoming DJs because of the sense of glamour that's associated with it rather than a deeper love for music.

"If you're just going out there to play stuff from the Top 100, what's the point? What are you offering that someone else isn't? Take your time, learn about music, and figure out what represents you and what you want to share with the world in a way that feels authentic and true to yourself. Then start finding bookings. Once you've done that, the booking will begin because you'll be doing something unique."

Third Culture (Remixed) is out 21 April via Thoughtless