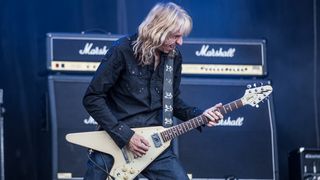 Heavy metal owes a huge debt of thanks to Dave Tatler. It was in his capacity as older brother that he set a young Brian Tatler on his path towards Diamond Head and their fast-evolving take on a NWOHBM sound that would resonate worldwide and - certainly upon reaching the Bay Area, San Francisco - change the face of metal.

Brian Tatler first became aware of the guitar when he was around eight years old. It was Dave, six years his senior, who brought one into the house. He had a band. He planted the seed.

"I was around the guitar, and I would have a go on his guitar occasionally, but I didn't start taking it seriously until I was about 14," remembers Brian.

"Even though my brother was encouraging me to learn from the age of about 11, I just didn't have the patience. I hadn't had the eureka moment where I thought, actually, this is for me. I probably was busy doing other things, riding my bike and doing what you do."

Then Ritchie Blackmore, as only the Man in Black can do, made a disciple of the young Tatler and then it all got serious. Soon, Brian overtook Dave as the Tatler household’s premier guitarist. As Tatler explains, he became a player who taped everything - from little scraps of song ideas, riffs and whatnot, to full songs.

Fittingly, it was early Diamond Head demos that found some traction. Journalists such as Malcolm Dome and Geoff Barton were early champions of the Midlands-based band - then a quartet, with Tatler joined by Sean Harris on vocals, Colin Kimberley on bass and Duncan Scott on drums.

As Tatler remembers it, it was upon their recommendation that a young Diamond Head supported AC/DC over two nights, as their legendary manager at the time, Peter Mensch, put out the feelers for a young, up-and-coming support act. That they were.

The early Diamond Head sound was all about the energy and vibe, and lots of riffs. And while they would soon grow more progressive - perhaps too soon for an audience who were weaned on the denim-and-leather urgency of Lightning To The Nations - the riffs would remain a feature.

The ambitious Canterbury (1983) had a Tolkien-esque vibe that, in another universe, could have been adapted into a rock opera for a Terry Gilliam film. Tatler was always stretching himself as a songwriter. And as he shares his top 5 tips for guitarists, that's what he advises you to do, too. After all, it's the songs that people will remember you for.

1. Write as many riffs as you can

"I do come up with a lot of riffs, and for years and years all I would do was just keep taping them. I'd have a cassette recorder and hit record. I'd play the riff and then I'd leave it. I'd come back to the tape, and when it came time to write an album or a song I would probably review my cassettes. I might dismiss 20 riffs and find one that's good, and as a band we would work on that riff.

"Then you think what will go with it. Once you've decided where a song starts, you need to be able to draw on your little reservoir of other riffs that will work within that tempo, and maybe in that key. So you've always got riffs flying around your head that you think you might be able to get into a song. I've had riffs for years and then, eventually, their time might come where I think, 'Oh, that one will fit there. That's gonna work.'

"All the people I liked were riffers. People like Jimmy Page and Tony Iommi, then you've got Ritchie Blackmore, and a little bit later Michael Schenker and Eddie Van Halen - they were all coming up with these great riffs and I wanted to do the same. AC/DC and Rush as well. It all went in the melting pot. I wanted to be able to create great riffs."

2. Record everything to analyse not just your playing but your song arrangements

"I'd record rehearsals. I'd record new songs and we would just sit and listen to them and say, 'That bit doesn't really work there!' Then we'd go to that bit, the middle eight or whatever, and we'd try it again, we'd record it, and learned the art of writing through trial and error, listening to ourselves and critiquing.

"Sometimes the only part you like is one piece of the song, and it might be the bridge or the middle eight, or the chorus. As long as your brain is flexible and open, you should be able to draw on all kinds of ideas from the tapes.

"Sean and I wrote very well together. We would just sit together and work on ideas - he'd come up some, I'd come up with some, and we were pretty quick. We wrote a lot of songs together that way. We had that knack. We complemented each other. He was very good in areas that I wasn't, and vice-versa, so it was really a good marriage of writers. It wasn't difficult. We never found it too uphill."

3. Adjusting your expectations as a player can liberate you as a songwriter

"I wanted to be great. I probably I thought I could be like Ritchie Blackmore, but the only thing that stopped me eventually was hearing Yngwie Malmsteen in 1984, when he released Rising Force. When I heard that first album I realised I'm never going to be the greatest guitarist in the world because this guy is already way better than me, and he's younger than me, so at that point I thought, ‘Right, I'll focus on songs.’”

"As far as being the fastest gun in the west, it was completely pointless, because I was already way behind Yngwie Malmsteen. I do remember having that feeling that I'm never going to be that good. And now, of course, you've got people like Guthrie Govan.

"I really like Joe Bonamassa, and I just think I couldn't play like that. I would have to spend eight hours a day for the past 40 years to even approach that, and even then I think certain people, physically, can play faster and more accurately than others. I think there's just something in you – providing you've got the patience to do it.

"I don't think any amount of practice would get me up to that level. [Laughs]. I can't do it. I've tried. My right and left hand won't accurately play as fast as Al Di Meola. I just can't do it. I've tried and tried and tried. So I do what I do. I have to focus on getting better, and on being myself; I can't compete with certain players who are just so far ahead. I don't even bother trying.

"I don't know if that's good advice or not. I think if you're young, fine; set your sights as high as possible, but when you hit a certain age you've got to be realistic. But practise every day: I still practise every day. I always do warm-up scales before a gig or a rehearsal."

"Very often, when Diamond Head are flying to a foreign festival, I'll take only one guitar, a tuner, and some leads. And that's it. We'll be using a hired backline, or sometimes we have used the support band's. I'll have a 15-minute changeover between bands and have to quickly dial in my sound into an amp that I've never used or seen before. It could be a Marshall, a Mesa/Boogie, Peavey, Crank, Randall...

"So I normally try to dial in a classic Marshall tone, somewhere between AC/DC and Van Halen! [Laughs] People don't realise it: when you are flying to gigs you are maybe using all kinds of weird stuff, and they always presume it's all your gear but if you go on easyJet and you only took one guitar you'll just have to work with what you've got."

5. Listen to as much music as possible

"My brother used to take me to see bands. He took me to see Can, Gentle Giant and Black Sabbath, Emerson, Lake & Palmer - all sorts of bands when I was probably 13, 14, and that had an impression on me.

"I listened to a lot of prog and I think a lot of it seeped into Diamond Head, because we weren't just fixated on one band. We weren't going to be like a clone of Black Sabbath or something. There is all sorts flying into Diamond Head because, partly, my brother's taste in music, and I was just open to all kinds of bands. I could run you a list of bands that I would listen to and I had albums by, and I think it all just seeps in and, eventually, you find your own style.

"I don't think it's a good idea to get bogged down with just one band. I think it happens more now. I would imagine that a lot of young bands now only like, say, this type of metal, and everything outside is all for wimps and what have you. And so they end up sounding exactly the same - and that's not original. That's not the way to be. I think it's better you trying to find something that's new, a bit fresher. Take it forwards, or take it somewhere a little bit different rather than just more of the same.

"Learn to listen to the subtleties of players: the vibrato, the tone, good feel. Copy licks from the greats and mix it all together and eventually you'll develop your own style or sound. If the four members of Diamond Head would only have liked Black Sabbath, we would have sounded like Black Sabbath and that would not have been a good thing.

"Like I said, I saw Can, I've seen so many unusual bands through the years, everybody from Frankie Goes To Hollywood to Behemoth. You name it!

"I've always been a bit of a fan of pop. I've got a respect for people who can write good pop, more probably '70s, '80s, '90s pop rather than today's. I'm not up to speed with what's going on now, but I do appreciate a well-written song in any genre. It doesn't have to be drop D and 'Wargh-argh-argh!'"

Diamond Head tour the UK and Europe in October/November - head over to the band's official site for details and tickets.