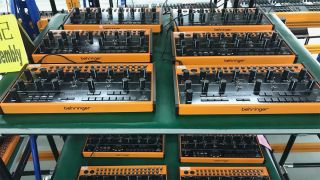 It often feels like Behringer is making a conscious effort to keep itself in the headlines, but one product we haven’t heard much about for a while is its Crave semi-modular analogue synth. However, a new photo posted on the company’s Facebook page indicates that it could now be close to shipping.

Launched at the 2019 Winter NAMM Show, Crave combines a VCO, classic ladder filter, 32-step sequencer and 16-voice Poly Chain. Unlike many of Behringer’s other recent synth releases, this is a new design rather than an emulation.

That said, the oscillator is the 3340, the same as in the Sequential Prophet-5 (and Behringer’s own Neutron, for that matter) and it’s a Moog-style filter. The patchbay ensures plenty of sound design flexibility.

The new photo suggests that Crave is now rolling off the production line, though we still don’t have a confirmed release date. We’re assuming that the predicted $199 price tag still stands, though, and that’s certainly going to keep plenty of people interested.

More news as we get it.