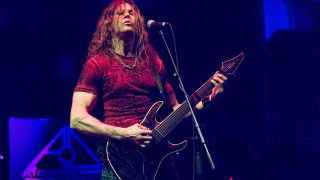 Upon his departure from Megadeth in 2014, shredder supreme Chris Broderick didn’t waste any time getting back on the metal horse: he formed supergroup Act Of Defiance that same year, who dropped their debut, Birth And The Burial, in 2015.

Broderick’s formidable skills are in full force throughout, as he tears up the fretboard on his signature Jackson with typically fluid runs, rapid-fire tapping and “a few new techniques” along the way.

Given a career that encompasses one of the biggest metal bands of all time, as well as stints with Jag Panzer and Nevermore, Chris certainly has some valuable experience to share with aspiring players.

“These tips have an industry focus,” he explains. “Hopefully, they will help anyone with an interest in building a career around playing the guitar.”

Read on and learn…

“If you are playing the guitar for any other reason than the love of the instrument, you are in for a lot of frustration. I remember playing in a local band that was doing pretty well, and all of a sudden, one of the members just up and quit.

“In that time, I remember talking with the bass player, and he made a really odd statement to me: he said, “This was all for nothing”. I was taken aback, because even though I was bummed, I felt like I had grown both as a player, musician, and band member: it was not a waste.”

2. Be patient and clear about what you want out of your technique

“It’s a great idea to want to be a great guitarist, however the overeager forcing of your technique before it’s ready can cause a lot more problems than it solves.

“In other words, be patient and keep practising well-executed technique slow and not failed attempts fast.”

3. Take every opportunity you get

“Sometimes you might not get a gig that’s the perfect fit, but it leads to so many possibilities.

“Say you’re a metalhead, and you get a blues gig. You might turn it down, but it could do so many things for you, such as skills in the industry, band interaction, stage performance, music performance and more…”

4. Don’t turn down opportunities based on self-doubt

“Let the people offering you the opportunity make the determination about your fitness for the position offered.

“I like to think of it like this: if you’re put in situations that might be beyond your current skill level, it will make you strive to reach new heights, and if it’s beyond your ability and you don’t make the final cut, you’re still in the same place you were before the opportunity.”

5. Network with people in your field of interest

“Just like in any job, a lot of times it comes down to who you know and not what you know (unfortunately) [laughs].

“Go to shows, get to know other local players and learn from what they are doing (hopefully they are doing good things), and when they see an opportunity they are not interested in, they will think of you.”

Old Scars, New Wounds is out on 29 September and available to preorder via Metal Blade Records.