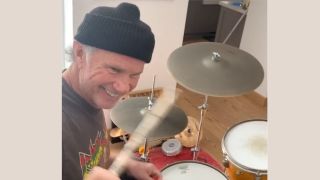 As we’re reminded that lockdown applies to rock legends as well us us ‘normal’ folk, it seems that the payoff from social distancing and lockdowns is getting to watch as the world’s favourite musician’s try and keep themselves occupied.

One such legend is Red Hot Chili Peppers’ Chad Smith, who has taken to Instagram for an extended game of Name That Groove in a video series he's named Quarantine Beats. Over the last two weeks, Chad has posted a beat-a-day, inviting his followers to ‘say what they see’ and unsurprisingly, he's nailing every one of them.

Scroll down for a selection (we haven't given the game away), and follow Chad on Instagram to keep up with the posts.