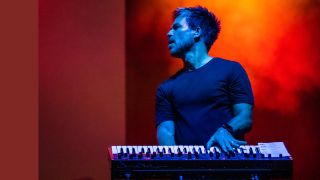 The companion album, the experimental Everything You’re Searching for is on the Other Side of Fear, is due out 13 December, also via Black Hole Recordings.

"I heard this piece of music for the first time on a dance floor at the age of 17 in New York City club Limelight. The thought that a pulsing ostinato could build and undulate for 50 plus minutes and continue to drive me to move my body was a profound inspiration in what I do. This piece of music unlocked something profound for me."

"Classical music is my starting point connection with the world of music. Along with making field recordings and becoming fascinated with the idea of organization of sound that is “non-music” or music concrete, my introduction to classical music began very young. I studied Suzuki method piano from the age of four, and I went to Washington Conservatory at the age of seven.

"My teachers exposed me to breathtaking music by Bartok, Stravinsky, Chopin, Wagner and Rachmaninoff - greats from every era. The one that to this day speaks to me the most is Debussy. The aching ambiguity of his chord voicings, the soaring longing of his counterpoint and melodies that could cut the most guarded heart in half. I adore his work. This is a personal favorite."

"To this day, it’s hard to quantify why this piece speaks to me personally in the way that it does. I put this next to another song that had a similar effect on me. I heard this on WHFS (our local indie station in the 80’s and 90’s) and literally (no hyperbole) pulled the car over and wept.

"It’s simple, direct and again has this kind of ambiguity, human longing that is my favorite feeling in music."

"I went to the Berklee College of Music at the age of 15. When I was there, I was the youngest kid ever admitted at the time. This song was out then and I am still moved by the profundity and directness of the lyric.

"What she says and with the candor and courage she says it is bone-cutting. This is an example of the finest kind of songwriting craft humanity has to offer, IMHO. The modern equivalent to this would be like The Band Perry’s “If I Die Young” (another absolute favorite)."

"This may seem like a strange one to include here, but the sound of this track made me rethink engineering in general. The arrangement and use of compression is mind-blowing."

"This entire series of works sprinkles in the exact right amount of dub and synth goodness I adore.

"He’s a mixolydian addict as well, so all these works really speak to me."

"Another red pill moment for me. Hearing this album as a kid made me realize the way we structure modern pop songs is a construct everyone just blindly accepts.

"You can tell a story that starts one place and ends in another without every crossing back.

"The use of thru-composition and ambient music mixed with tape loops and other electronic elements in a band context blew my mind."

8. The Blue Nile – A Walk Across the Rooftops

"Talk about aching and longing. Even thinking of this record conjures massive emotions of nostalgia, a hopeful kind of sadness and loss.

I remember listening to this with my two best friends as a kid (Hamid and Ali) and thinking, 'How can something cut on to a piece of vinyl make me feel so heard and understood?' It felt like a record made just for me."

"This whole time period of music that encompassed The Orb, KLF, etc. was my lightbulb “anything is possible with synthesis” time period.

"This one hasn’t dated well, but it was a watershed moment for me when it came out."

"The greatest rock record ever made (that really isn’t a rock record), IMHO. I loved Jesus and Mary Chain growing up, and I loved this kind of Phil Spector meets wall of distortion sound. When I heard Loveless for the first time, it was a very intimate experience.

"My friend Richard Fortus (who now plays with Guns N’ Roses) and I were on tour for my album Movement in Still Life and he played it for me. We listened to that album about eight times in a row, jumping on the benches of a moving tour bus. It’s imprinted on me like a scar."

"This one is hard to even write about because it had such a massive effect on me, I probably would not be making music without it. I rode my BMX bike to the theatre as a kid, bought some hot tamales (I’ve been paleo for about 15 years and those may be the one thing I miss - sorry for the digression), and watched this movie until the theatre closed.

"Simply, the ethereal reverbs, worn in future esthetic, haloed lights and massive subsonic CS-80 bends made me say 'That’s what I want to do for a living…no matter what.'

"I wouldn’t be making music professionally without this score."