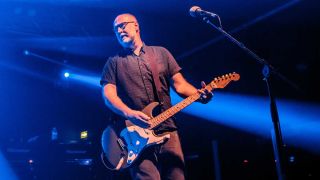 Back in the '80s and '90s, talking to Bob Mould was reportedly a combative affair.

At that time the self-described ‘miserablist’ was haunted by ghosts of his time in genre-bounding melodic hardcore trio Hüsker Dü, bitter rivalries and other personal battles, from which the music press of the era delighted in extracting heavy-handed stories of scandal and intrigue.

Fortunately, the temperament of the songwriter has changed over the intervening decades to the point where he can now release a record titled Sunshine Rock and keep a straight face. Even he does have to frequently reiterate to disbelieving long-term fans that it that it is not an ironic moniker.

Created in Berlin and recorded in San Francisco, the record sings with dense walls of guitar, guttural melody and the sort positive vibrations that might seem to have no place in Trump America, Brexit Britain, or indeed anywhere in the presently wrecked-up world. Rather, this is an album that smiles in the face of adversity. A musical flower in the gun barrel.

“I’m maybe protecting the creative space,” considers Mould. “[It’s about] trying to be optimistic, as opposed to going out there and making some heavy political statement that really should be obvious to anyone who is living at the moment!”

It'd be interesting to get an idea of how you see yourself as a guitarist now. Your influence as a player is well-documented, but how do you describe your approach to playing?

“A very innovative rhythm guitarist. And a pretty less-than-average soloist! I often tell people, I give a caveat for my less-than-stellar soloing, and say that when I pick up the instrument, ostensibly to play or practise, I usually end up writing. So as opposed to that hour or two where most people will either sit in front of a, play in front of a mirror or play things at half speed to learn them, or just work on all their scales and stuff, I really don't bother with that. I guess that's to my own detriment, but...

“So, yeah, I think my rhythm playing has always been better than my lead playing. I can play leads, but I much prefer to push out these complex, dense chord structures that it's more like a series of low-lying clouds as opposed to this flash of lightning solo thing. So, I like them both, but that's my assessment of what I do with my hands.”

Your time living in Berlin has had a big influence on the writing of Sunshine Rock. What kind of environment is useful to you, creatively?

“Over there in Berlin I've just got a small workspace, with the most minimal of setups. It's laughable. It's a guitar, a bass, a Blackstar Fly, a vocal mic, a laptop, and a pair of small speakers and headphones, and an IO box for two channels. And that's about it.

“And that's in contrast to San Francisco, where I have a pretty big workspace, with a really decent writing studio, and all guitars, all amps, all kinds of bells and whistles. So, I think what Berlin showed me was not only with the utilitarian nature of the work tools but also this white box life that I have over there, I'm not distracted by memory, by objects, by possessions.”

Environment is one of those things we don’t always dwell on but that plays a huge part in it for a lot of people.

“Huge. Environment is always key to making a record, whether it's comfort level, or location, or weather, or... All of the things that comprise the beginning of your day to the end of your day wherever that may be.

“There would be mornings when I woke up, and I think like most people my tendency is to grab for that piece of glass that sleeps next to you - your phone or whatever. One thing that I was doing, much to my emotional detriment, was I would look at the news - of course, hoping against hope that this fuck [Donald Trump] would be gone - but no, that never happens, so I felt myself getting pulled into the news. And it would be upsetting, because it's not been good news for a long time.

“So, I made a conscious choice to wake up and not touch that thing, and not look at anything that had glass on it. TV, or computer, or phone, any of that. And instead, I would go over and find a book, whether it's the theory behind the making of Joni Mitchell's Blue, or The Beatles studio notes. And instead of spending an hour obsessing about things I can't change, I would read an hour's worth of musical education, and instantly feel way more inspired.”

It’s interesting you mentioned books, because looking online at the pictures of the recording studio you used, Tiny Telephone in San Francisco, they have a wall of books in one of the live rooms, which seemed quite unusual for a studio!

“Well, it's a rectangular room with about a 20-foot ceiling. It's an old wood warehouse, so it's a pitched, almost like a barn, but that back wall that has the books, that's where you put the drums, back against that wall. And the books actually act as natural sound diffusion, because they're different sizes and the absorb refraction. It's really amazing, and so beautiful as well.”

What was your main guitar gear for these sessions? Obviously, you've previously relied on late '80s Fender Strat Plus models.

“Yep. Same guitars as always. I've got five different Strats that I rotate through. Some have thinner necks, some have thicker necks. Some are a little easier for solos, some are really built for rhythm parts. I know which ones work for the parts that I have to play. They've all got the Lace Sensor Light Blue pickups with the exception, I think two of them I swapped the lead pickup to the hotter, dark blue Lace Sensor. It's more of a crunchier, fatter, more sustained thing.

“Pedal-wise, the same. The custom Distortion Pluses that TYM Guitars make for me in Brisbane, the TC Flashback, the Electro-Harmonix Freeze. I think I've been using the Wampler Ego as an end-of-chain compressor.

“Amp-wise, the Blackstar Artisan 100 is my go-to amp. I think for tracking, I used a Matchless 2x12 and a Blackstar Artisan 30, in a vocal booth. They were like the on-the-floor scratch rhythms, when the three of us are playing together, but a lot of them sounded great, so I kept a fair amount of them for the record.”

Were there any particularly new or useful tone discoveries from the sessions?

“I guess the biggest upgrade for me in approach in sound this time in recording was the Radial JD7. There's a company called Radial Engineering that makes these iso boxes. And this is a two-in, seven-out box with Jensen transformers, and every channel out to amps all at once. Each channel has a phase, a ground, and a buffer on it, so when I got into guitar overdubs, I was able to set up five different amps in the room and mic each one individually, and have full control over ground lift and phase on everything, from the Radial JD7.

How would you describe your mindset as a writer on Sunshine Rock?

“Well, I think after the stretch of three albums with Jon and Jason, with Silver Age, which was envisioned as a companion piece, or a call and answer to Sugar Copper Blue, because it was the 20-year anniversary. So that was a motif. Beauty and Ruin and Patch The Sky were both informed by periods of personal loss, losing each parent, one after the other on those records. And so there was a lot of down moments, I think on those two records, where there was I think a little more tendency to go to the dirge as opposed to the uplift.

“So after that, and not to say there hasn't been more loss, there always is, especially as we are fortunate enough to have longer lives, I think my goal this time was to really try to focus on the brightness of music, the ability of it to heal people, to lift people up.

“It was funny because when the first song, Sunshine Rock, went out, the response that I was getting from my peers the next couple days was like, ‘I thought this was gonna be all ironic, but nope. You're really doing it!’ I'm like, ‘Yeah. There's nothing ironic about it.’ That cover represents the image that I saw spinning on a 45 RPM player as a kid, that kept me sane in a household of violence, as a kid.

Sunshine Rock is out on 8 February via Merge Records.