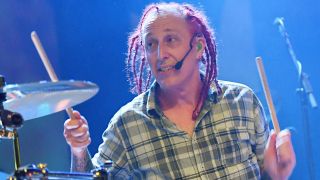 In the 46 years since he first picked up a pair of drum sticks (jamming Hendrix tunes with his father at the tender age of three years old), Morgan Rose has carved out a career as not just a mightily hard-hitting drummer, but also as one of the most entertaining players of his generation.

Rose’s work with Sevendust – a band that he co-founded way back in 1994 – is absolutely drenched in charisma. No wonder then that down the years, aside from his jaw-dropping work with his main band, Rose has been tapped to fill in for rock heavyweights like Mötley Crüe and Korn when last-minute gigs have arisen.

Coming back to Sevendust, the band has racked up a slew of Top 20 records over in the States, shifting millions of albums in the process. Their latest effort, All I See Is War, is their 11th studio release (not counting 2014’s acoustic record Time Travelers & Bonfires) was released this year and it once again finds Rose on top form.

We chatted to the energetic sticksman and put to him our raft of key questions; from first kits and early lessons to dream drum teachers, the secrets of a great live show and much more...

What was the first drum kit that you owned?

“My first kit was a Black Tama Rockstar. I ended up spray painting it blue zebra striped, like a complete
and utter idiot.”

Who were your earliest drum heroes? Who inspired you right from the start?

“My first drum hero was probably Terry Bozzio. My dad would play Zappa videos and I was mesmerised.”

“That’s an interesting question. I attended MI (Musicians Institute), but I rarely went to class. I thought it was a better idea to swallow up all that LA had to offer, other than the school, of course. Another idiot move. Ha!”

“Hmmmmm. Today, I’ll say my [Pearl Throne] Thumper. I’ve become incredibly dependent on it over the years. Whenever I’ve had it go down, or if I have done fly gigs without it, it feels super-awkward.”

What’s the biggest onstage nightmare you’ve ever had?

“I’ve had many. I guess the one that I always go back to is having a 40° temperature and vomiting in buckets while jamming. I mean, that’s happened a number of times. But I can’t think of anything that’s been worse than that for me.”

Who would you most like to take a drum lesson from?

“If I could have any amount of time with Bonham, I don’t know what I’d do. Other than him, I don’t know, Ray Luzier? One of my closest buddies that makes me nauseous every time I watch him play! That would be comical and educational.”

What do you see as your greatest strength and your biggest weakness as a drummer?

“I guess my biggest strength is being entertaining while not completely falling apart on the deck. I try not to look at too many videos of me playing, because, to me, it looks ridiculous. If you’re gonna be stupid up there visually, you should be able to hold the fort down. The weaknesses are everywhere! I’d say my biggest weakness is that I never practise. EVER! Hence the reason for the weaknesses being everywhere. I just don’t jam. I like writing songs lyrically, melodically. I like working on counter melodies. The last thing I usually think about is the drum parts. I don’t know. I don’t advise it!”

Who do you see as a vastly underrated drummer?

“I’d say Ray Luzier. Even though he’s gotten plenty of attention. I don’t really think enough people know that the guy is serious business. He basically can do whatever he wants on the kit. Like I said, it’s nauseating.”

“It’s always been playing for our military. We’ve done so many amazing things over the years. But to see the reaction of men and women that are putting their lives on the line, react like they have to us... It’s the highest honour for us as a band. It changed my life. Aside from music? It’s been watching my children grow up. My daughter is out of control as a dancer. She brings me to tears every time I watch her. She’s the Luzier of ballet in my opinion, ha ha!”

“I’ve been given lots of great advice over the years by other musicians but I’ve rarely listened to it unfortunately. Ha ha! I’d say, to watch your business. If you’re doing this for a living, watch your business. The amount of trust we gave to people in our business was stupid. Not many people walk into an interview saying, ‘I’m probably not gonna be able to do much for you, but there’s a good chance I’m gonna rob you f***ing blind while smiling at you.’ But that’s happened to us multiple times. You just have to be conscious of what’s going on around you.”

“I’d say being mentally and physically prepared. If
you’re in a touring situation that’s emphasised even more. But I’m not sure people realise the mental side is as important if not more, than the physical. In my opinion anyway.”

Clear or coated heads – do you have a preference?

“I like clear heads, my tech likes coated. So I play coated.” [laughs]

Dampened kit or let it ring?

“I like to hear the kit ring all day, my sound man wants a little goo on it to dampen the sound of the kit. We go with the goo!”