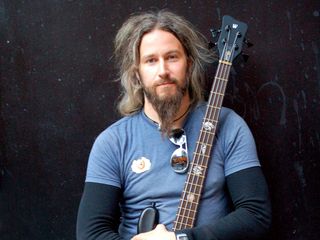 PRESS RELEASE: Warwick is honoured and pleased to announce joining forces with one of the powerhouses of modern metal, Troy Sanders of Mastodon.

Mastodon has risen through the ranks of the metal underground to playing sold-out arena tours with the likes of Metallica, Alice in Chains, Deftones and Dillinger Escape Plan. They are widely considered to be at the forefront of the recent upswing in heavy metal's popularity around the globe.

Their latest record, entitled The Hunter, was released on Roadrunner/Reprise on Sept 26th, 2011.

Warwick has inaugurated the occasion by building a custom Mastodon-themed Streamer Stage II, adorned with symbols from their past albums in beautiful silver inlay and bestowing it on Troy.