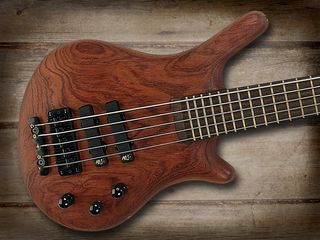 BASS EXPO 2014: In the fourth part of The History Of The Electric Bass we look at how the sharp rise in popularity of the bass guitar led to an explosion in options for bass players and an ever-increasing demand for extra strings...

At the start of the 1960s bass players in the UK were pretty spoilt for choice. The trade embargo with America was finally lifted so along with all the continental names including Framus and Hofner we had Fender, Gibson, Harmony, Rickenbacker, Gretsch and Danelectro.

It was like all our Christmases had come at once! Lots of different styles, shapes and sizes but while the early bass guitar designs may have differed slightly on scale length they were all presented as four-stringed instruments. This was taken from the popular upright basses that were in common use at the dawn of the bass guitar and although 5-string uprights were available these were mainly used in orchestras.

The first time a bass guitar received more than four strings was when Danelectro introduced the UB-2 bass as early as 1956. It didn't last that long as production ceased in 1959, but it certainly made a lasting impact. Although tuned an octave below a regular guitar it was not actually aimed at bass players, rather it was a rich sounding deep baritone guitar that could be heard to great effect on Duane Eddy and Everly Brothers records of the time. When production ended session players were still using the UB-2 so Fender decided to get in on the action.

In 1961 Fender released their impressive Bass VI onto the market. Again this was intended to be a lead instrument and in Britain Jet Harris used it on his early solo recordings as just that. However, with it's slightly shorter scale and tight flatwound string sound it soon found favour with UK bass players too. Jack Bruce, Eric Haydock and Klaus Voorman were seen constantly using the Fender VI on TV with Cream, the Hollies and Manfred Mann and the multi-string idea caught on.

In 1965 Fender surprised us all with the Bass V, the first 5-string bass and was aimed directly at bass players, but it was a rather curious thing. Surprisingly the extra string was set at a higher C above the G and as a consequence had a shorter scale and less frets. John Paul Jones used one with Led Zeppelin but it never became generally popular.

The sixties also saw the rise in popularity of the 12-string guitar so it's hardly surprising that an 8-string bass should appear. One of the best of these is the Rickenbacker, which has appeared in various guises over the years. The semi hollow bodied 4005/8 appeared in 1967 with the strange wavy 'potato' headstock that accommodated a mixture of bass and guitar-sized tuners. John Entwistle and Chris Squire bought the two 4001 8-string prototypes with the same style of headstock whilst the 4008 from 1972 reverted to a stretched 'normal' shaped headstock. More recently we have the 4003/S8, but all these models have become collectively known as the Rickenbacker 4008. It's just easier!

Tom Petersson of Cheap Trick was playing around with a Hagstrom H8 then asked Hamer to build a 12-string bass and they produced the Chaparral in 1977. Something of a monster to play as it features the four main bass strings with two octave 'drones' apiece but it produces an equally massive sound. Like the early Rickenbacker 8-string basses the main bass strings had bass-sized tuners whilst the drones were guitar sized, hence the headstock mass was kept to a minimum to save the thing from being totally unwieldy. Hamer then also produced a more regular 8-string version, which still remains popular.

Although Fender's 5-stringer proved a bit of a non-starter the 5-string idea was actually a good one. The revolution really began when a fifth string was added below the regular four and in the mid seventies boutique instrument makers like Alembic and Tobias introduced this low B option. And now with the advantage of active electronics to boost the relatively low output from this massive string, bass players now had the ability to play down to low C along with the keyboards and even have a semitone to spare!

In 1975 session bass player Anthony Jackson commissioned luthier Carl Thompson to make him a 6-string bass with a low B and a high C, which he called the Contrabass. Earlier in the 70s Emmett Chapman produced the amazing Stick with ten strings, involving the use of both hands on the neck and using a tapping technique.

Bassist Tony Levin turned this into an art form using it to great effect on recordings with Peter Gabriel and King Crimson, but what made most impact with all of these was that low string. Highly successful and influential 'bottom B' bass in the UK were the Wal Custom and the Wal Mk II 5-string. These were exotic looking, beautifully built and very electronically advanced.

As 1980 dawned bass playing was at an all-time high. Anything and everything was being pursued from active electronics, carbon fibre construction, headless basses, acoustic basses, fretted and fretless and even the skeletal electric upright. Exotic woods were favoured and retail prices went through the roof and yes, even more strings were added.

Michael Tobias was asked to produce a 7-string bass for teacher/writer/performer Garry Goodman and other players have asked for more. But this is taking the bass guitar into a whole new world and as far as bass technique goes these wide necked mega-stringers are a completely different instrument. For the individual player there's an advantage to these curious beasts but as they come and go the 5-string bass is definitely here to stay with many classic bass models being offered in 5-string formats too.

One of the main reasons that bass became so popular in the eighties was the improvement in bass technology as a whole, in amplification, speaker design and, perhaps most importantly, in audio reproduction. Bass could now be heard clearer, deeper and louder than ever and it soon began to dominate the mix on recordings and on stage.

As a result the bass industry experienced a huge boost in popularity with songs often being constructed around the bass lines like never before. Fretless players like Mick Karn with Japan, or slap style bass players like Mark King with Level 42 were a huge influence on British bass players.

This trend continued into the nineties with Flea of Red Hot Chili Peppers and Stuart Zender of Jamiroquai standing out from the crowd but sadly this state of bass euphoria began to wane. However 'regular' bass players now have four, five, six, eight and twelve string options to hand and, with extra necks, even more, but that has to be another story.