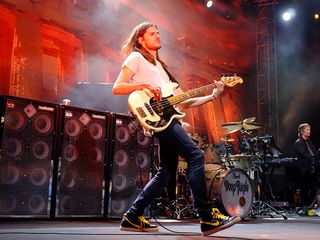 PRESS RELEASE: Nick Fyffe got a very last minute call to fill in for regular bassist Roger Glover for a series of sell out European dates with legendary rockers Deep Purple.

Yamaha literally had hours to recommend, set up the guitars to Nick's liking and deliver, rock ready, a black and a white BB2024X.Originally booked for a couple of dates Nick ended up playing 10 shows over three weeks. For all the gigs Nick turned to his tried and trusted Yamaha BB series basses.

Nick told us " I originally considered taking two other basses from my collection though as expected I found that the Yamaha BB's had a more cutting sound and effectively replicated Roger Glovers original tone - the BB's worked better for this gig and sounded totally awesome when plugged into Roger's massive rig which delivered over 4800 watts!"

Nick was in the house band Bass man for Superjam 2011 on Friday 8 July at the Albert Hall when he was shoulder-rubbing with Rock Gods yet again, "An epic fundraising night of live music featuring legends of rock!"