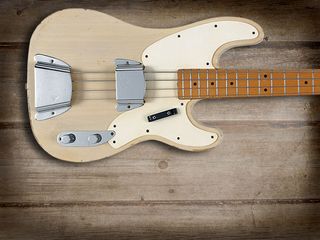 In 1968 Fender acknowledged an increase in demand and released the Telecaster Bass (so called because of the distinctive Tele-Style headstock).

It was pretty much a replica of the original Precision Bass of 1951 using existing 'left over' stock so what is particularly significant is that these instruments were essentially the very first reissues from the company.

Curiously many of these also sported the distinctive oval (paddle) tuners that were previously only ever seen on a few Jazz basses and usually those with custom finishes. The scratchplate had extra securing screws as the original plates were inclined to warp over a period of time and the finger rest was fixed with two screws to prevent the annoying twirling of the single screwed original.

The very first of these used a Telecaster guitar decal on the headstock with 'BASS' added and some had a maple capped neck so there was no skunk stripe at the back.