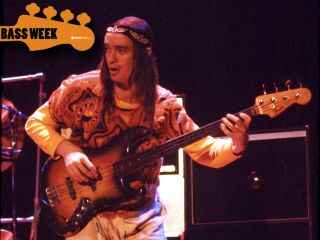 Ask any bass player to name his top 10 bassists and you'll find that Jaco Pastorius almost always features in the top three. Of course everyone is entitled to their own opinion but whether devotees or not all players agree that Jaco was unique, with an extraordinary ability to make his basslines fluid and significant no matter what he was playing or who he was playing for.

As with any genius - as he surely was - his destiny ran close to insanity and sadly much of what has been written about him centres on that element, yet all that really matters in the grand scheme of things is what he brought to the world of bass playing.

Jaco started out as a drummer but barely into his teens he broke his left arm, lost the ability to play properly and was kicked out of the band he'd originally formed! At 15 he was invited back if he could play bass so he bought one. "I didn't know where the notes were or anything, I just started grooving and I've never been out of work since!" he said.

Interviews with Jaco were few and far between as he lived in an era when singers and lead guitarists commanded far more interest than mere bass players and it's only now, years after the death of many a great bass player, that we are aware of the short-sightedness of this 'frontman' approach.

However, anyone taking centre stage is only as strong as his or her supporting team and Jaco was enormously strong. Yet it wasn't always appreciated as Bob Bobbing, a bass playing friend from their teenage years, recalls:

"He really did impress people, even though band leaders at that time didn't appreciate what he was doing that much, because if you were lead singer it would get in the way, interfere with the agenda of the band leader or possibly other players."

Joe Zawinal, leader of Weather Report, would no doubt agree with that as the disagreements between him and Jaco over musical policy were legendary. Never the less Jaco got plenty of opportunity to take centre stage himself during his time with the band where his bass features on tracks like Teen Town and Birdland, (where Jaco used pinched harmonics), became nightly highlights.

His recording career was actually pretty short spanning from 1974-1986 but during that time he was able to enjoy working with a variety of artists and was able to leave his distinctive mark on all that he touched. He could be a fearsome personality and was often accused of trying to dominate the music in which he was involved yet he was charming and witty in person, although obviously confident in his own ability.

Early on he played on Pat Metheny's Bright Size Life album but it was the release of his own album in 1976 that brought real success. With tracks like Portrait Of Tracy, Donna Lee, Continuum and Come On, Come Over this was a bass album like no other.

After hearing his eponymous solo album, Joni Mitchell invited him to play bass on her Hejira album and that proved very useful as it introduced Jaco to a much wider audience. In fact widening his appeal almost became the game plan for 1976 as it was a truly monster year for Jaco's recording calendar.

As well as the Joni session he was invited to join Weather Report and made a guest appearance on Al Di Meola's Land Of The Midnight Sun album. He was on just one track with Al, Suite Golden Dawn, a piece that moved from frantic to sublime so ideal fodder for Pastorius.

Nevertheless it still sounds fantastic today but perhaps the most curious session for Jaco was on Ian Hunter's All American Alien Boy! This was an unusual album by the ex Mott The Hoople frontman and packed with performances by several top names of the time so at least Jaco was in good company.

And so it would go on, Weather Report albums, Joni Mitchell albums (including her famous Mingus album dedicated to the late great jazz bassist Charles Mingus), guest appearances with some of the greatest jazz musicians and continually gigging.

He also became more involved in arranging and musical direction but gradually that constant work ethic would take its toll. However there has been a book or two written about that subject, so what of Jaco simply, (if that's not a contradiction of terms), as a bass player?

Jaco is of course famous for using a fretless Fender Jazz Bass but whether he removed the frets himself or they had already been removed when he bought the bass second hand has never been fully resolved.

However in a rare interview during his time with Weather Report, Jaco stated, "I have a standard Fender Jazz Bass, 1962 I think it is, that I took the frets out of. I've been playing the bass guitar for almost twelve years and fretless for about nine, so I've got quite a bit of mileage in my hands already.

"I play in tune like a cello player and use legitimate vibrato. There are no tricks; it's just all in the hands! In the studio I don't use an amp, I just go direct into the desk. It's virtually acoustic, what I'm doing." At that time when he was performing he was using a pair of Acoustic 360 amps. "It's a whole different thing on stage… you get into all sorts of fun!"

The Weather Report line-up at this time was Joe Zawinul on keys, Wayne Shorter on tenor and soprano saxophone, Jaco on bass and 'new boy' Peter Erskine on drums. Pastorius: "We're just playing quartet, it's pretty dangerous. The album (Mr Gone, 1978) is more or less quartet anyway so we're out on the road in the same fashion."

Jaco, of course, also played drums on the album along with Steve Gadd, Tony Williams and Erskine so was he tempted to take over from Peter? "Nah, this guy's got chops like nobody else. I think my right foot is a little funkier than his - ain't better, just a little funkier", he laughs.

"He's been playing drums since he was four and he's been to music school whereas I'm pure street kid, never had a music lesson in my life. I learned everything from my friends and just constant gigging in night clubs, eight sets a night!" Constant working is definitely a tough route to follow but has actually produced good results for many a player.

Jaco has influenced and inspired so many people to take up the bass during his lifetime and beyond so he has to be considered as one of the greatest ambassadors of the instrument as well as one of the very best players.

"It's hard to overestimate the impact that Jaco had as a player", says old colleague Pat Metheny, "And also as a force in music." Certainly during the '80s and early '90s when fretless bass was at its height, Jaco's influence could be heard on basslines, phrases and general execution on tracks across all musical genres.

Metheny again, "Fretless bass was an instrument that had been around for a few years - he certainly wasn't the first guy to do it - but he just raised the standard of it to a completely different level. I mean, fretless bass is an instrument that, even to this day, post-Jaco, is rarely played with the kind of intonation and precision that he brought to it.

"Jaco did all those things with an incredible eloquence that is especially unusual for somebody who, at the time, was between 18-23 years old!"

As time went on the pressure and drive to be the best affected Jaco's mind and he became depressed and difficult to work with. One of the last people to see Jaco alive was Carlos Santana: "We played Fort Lauderdale and Jaco came backstage. I think he was having a hassle with the security or something, but it was almost like he was inviting trouble.

"We talked for a little bit, then we went to play and after Alphonso Johnson's solo he ran up on stage and held Alphonso's hand up like he was the champion or something, and the security didn't know who he was, and they started hassling him again."

He was outside, sitting on a fence when Carlos left the club and they exchanged a few words. Later that night of 11 September 1987 Jaco tried to gatecrash a club and was beaten unconscious by a bouncer. Ten days later he was dead.

These days with video clips on YouTube, reissues on CD of all the regular albums plus a host of rare tracks and live performances becoming available, it's easier now to see and hear the man in action than ever before, and that includes when he was alive.

We certainly recommend you explore these opportunities and bask in the bass glory of an incredible musician. His ability, tonality and musicality still shine as bright today as ever so let's just remember him as the star player and innovator that he most definitely was.