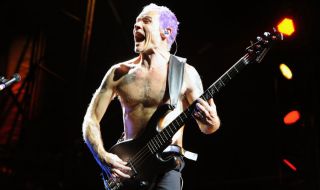 BASS EXPO 2014: Ask anyone to list their Top 5 favourite modern bass players and chances are Flea's name will crop up. As the wild haired, super energetic and endlessly creative bassist for Red Hot Chili Peppers, what this man doesn't know about writing a killer bassline you could put on the back of a postage stamp.

A musical powerhouse on stage and in the studio, Flea was voted second on the Rolling Stone 10 Best Bassists poll - second only to the great John Entwistle. Having written basslines like Around The World, Give It Away, and so many more, Flea can rest easy knowing that his name is up there with the funk rock greats.

Here are nine of his funkiest basslines to prove it...

An adrenaline shot straight into the veins of the iconic Stevie Wonder classic, Flea opens the track with an urgency that recalls his punk roots.

The Power Of Equality

What better way to kick off your biggest album to date than with a monstrous four string workout, and a furious outro? Still one of Flea's finest bass moments.

Flea's neck spanning riff created air bassists out of all of us and made this a benchmark rock track of the 90s. Its omission would be criminal.

Mellowship Slinky In B Major

The chemistry between Flea and John Frusciante was the Peppers' secret weapon. Here guitar and bass intertwine instinctively on the verses and lock in like cement on the chorus.

This track might be more about the vocal and guitar, but scratch the surface and you'll reveal a bass performance tailored immaculately for the song, every note perfectly placed.

Naked In The Rain

Just when you thought Blood Sugar Sex Magik had peaked, track 12 throws up this slab of glorious filthy funk, complete with greezy bass solo. Stick that up 'yer Billboards.

Despite gradually moving away from their funkier roots, the bassline on this standout track from I'm With You is a nod to the Flea of old, gliding and skipping around the main guitar riff in his inimitable style.

The Adventures Of Raindance Maggie

Stripped back drums and Flea's throbbing bassline underpin everything that's great about this Number One hit from the Chilis' most recent album.