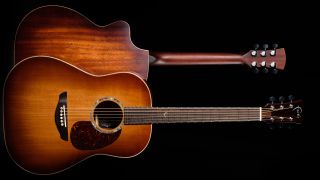 Faith Guitars and Patrick James Eggle's new super limited edition Monarch acoustic guitar models are living up to their royal title on spec with high-end appointments across the board.

The guitars are worked on in Eggle's workshops in Shropshire, England. The luthier commissioned two Earth and two Mars body shells from Faith's Indonesian workshops before work continues in Shropshire.

Only one of each will be available with more scheduled for later in the summer.

The tops are torrefied Sitka spruce with top-grade Khaya mahogany for the back and sides.

The finish and lacquer are unlike any other Faith models. Eggle applies the subtle burst finish by hand and you can watch the process in the video below.

After several coats the sprayed burst finish, each Faith Monarch guitar was finished in multiple coats of nitro-cellulose lacquer. Nitro is the finish of choice for luthiers because it's thinner than polyurethane and allows tonewoods to move more freely to enhance a more open tonality.

It also ages wonderfully to create the kind of patina  that vintage guitar enthusiasts love.

The painstaking finishing work behind the Monarch guitars includes the final touch of Patrick James Eggle rubbing back the nitro to create a hand-burnished semi-satin finish.

Both models will include a Faith hardcase and have a retail price of £3,299 / approx $4,150.  For more info on the Monarch guitars, head over to faithguitars.com