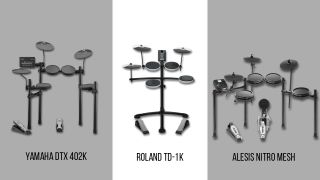 The affordable electronic drum set has long been a godsend for the neophyte player looking to begin their rhythmic journey without having to negotiate the space requirements and socially awkward noise levels of the acoustic equivalent, and these days there are plenty of fantastic options to choose from.

In this head-to-head, we’re pitting three of the leading sub-£400/$500 e-kits against each other to ascertain which should be at the top of the percussion newcomer’s shopping list based on a range of criteria. Will we be won over by the semi-real feel of Alesis’ Nitro Mesh Kit, the app-enhanced braininess of Yamaha’s D402K, or the elegance and pedigree of Roland’s TD-1K? Read on…

It’s truly amazing what £3-400/$4-500 will get you these days in terms of e-drum manufacturing quality, and the pads, pedals and racks of all three kits are clearly up to withstanding years of even the most enthusiastic hammering. And while the Roland TD-1K’s tree-style rack might not look as solid as the multi-post frames of the Alesis Nitro Mesh Kit and Yamaha DTX402K, in use it proves to be just as stable and hard-wearing, not to mention considerably smaller in footprint.

There’s another, more fundamental aspect to the construction of our three contenders that also needs to be considered, though: boasting tuneable mesh-head pads and a kick drum tower (a bass drum pedal is included but can be replaced with any model you like), the Nitro Mesh aims to get you at least a little closer to the feel of an acoustic drum kit than Roland and Yamaha’s offerings, with their rubber pads and standalone pedals. This doesn’t have to be the decider, but there is an undeniable appeal to the more representative physicality of those heads and that kick that may well give Alesis the edge here.

As for the three sound modules, they’re all housed in plastic casings and are easy enough to navigate; and although the degree of positioning flexibility varies, none of them are at all intrusive on the rack.

Again, the Nitro’s mesh heads and kick drum tower differentiate it from the other two kits in this department, but Alesis also appears to have the numerical edge when it comes to the noises you can make with the thing. With 385 sounds folded into 40 editable kits, you get more sonic range than the 287 sounds and 10 editable kits of the DTX402K, or the 15 uneditable kits of the TD-1K. However, ultimately, it’s likely most users will settle on one or two go-to kits anyway, or end up triggering much more high-quality sounds from a software drum kit running on their laptop or PC, so we shouldn’t put too much weight on that particular discrepancy. And actually, the TD-1K’s sounds are arguably the best of the bunch, despite being the smallest pool.

On that previous subject, computer connectivity is an important consideration with any electronic kit these days, enabling performances to be recorded and edited as MIDI in a software DAW, and the onboard sounds to be vastly improved upon by instead triggering a massively multisampled virtual drum kit such as Toontrack’s amazing Superior Drummer 3 or FXpansion’s BFD3, live or via the aforementioned recordings. Happily, all three kits can output MIDI over USB, with the Nitro Mesh also hosting 5-pin MIDI DIN sockets for input and output, and the DTX402K sending audio through its USB port as well.

As for the rest of the connectivity, stereo headphone outputs and auxiliary minijack inputs (for play-alongs) are ubiquitous, and the Nitro Mesh adds to those with stereo line outputs for connection to an amp.

With the three kits being primarily aimed at beginners, all of them include some form of coaching functionality and a number of play-along backing tracks to help the fledgling drummer improve their timing, accuracy and coordination. We’d argue that the coaching element is the more important of these two bullet points, and the Nitro Mesh is the weakest in this area, with only basic training features built in – although it does supply 60 backing tracks. The TD-1K, on the other hand, gives you only 15 songs to accompany, but eight coaching modes; and the DTX402K offers a paltry ten play-along tracks but an impressive ten coaching modes – Pad Gate, Fast Blast, etc. The last also scores points for convenience with the free DT402K Touch iOS/ Android app, which makes light work of customising drum kits and accessing the coaching controls.

Lastly, it’s worth noting that the TD-1K can be upgraded with an additional cymbal pad and a kick drum tower further down the road, while the Nitro Mesh is expandable through the bolting on of a third cymbal and fourth tom. Two cymbals, especially, are never enough, so that’s a definite plus for those two kits.

Naturally, it’s in the authenticity of the playing experience that the Nitro Mesh sets itself apart, thanks to its mesh pads and kick drum tower. For us, the more drum-like response of those quasi-membranous surfaces makes them superior to the rubber alternative, and this is particularly apparent with the snare pad, where fast rudiments and intricate stickwork are more easily controlled, and the dual zone setup allows for rimshots and cross-sticks (albeit quite tricky to trigger consistently). Equally, the visceral beater-on-pad ‘thwack’ of the Nitro Mesh’s kick trumps the comparatively lightweight action of its beaterless counterparts.

All that said – don’t get us wrong – the DTX402K and TD-1K both play really well, with the well-calibrated dynamic ranges of their pads, responsive pedals and dual zone/chokeable cymbals (chokeable-only on the DTX402K) working together to deliver more expressiveness and flexibility than you might expect at this price.

When the dust has settled, then, which of this electro-percussive trio will net you, quite literally, the most bang for your buck? Well, all of them are pretty much equal in most essential regards – configuration, build quality, inputs and outputs – and while none of them are ever going to pass for acoustic kits in any setting, their onboard sounds are more than adequate for learning and practice purposes. Essentially, then, you can’t go wrong with any one of them, and they’re all great value for money.

As we’ve suggested throughout this triple face-off, though, in our opinion, the mesh heads and real kick drum mechanism of the Nitro Mesh Kit make for the most convincing playing experience overall. Given the general sonic parity of the three kits, that improved playability has to be the most important factor left on the table, so Alesis’ bargain-priced effort gets the gong.