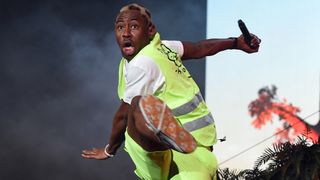 Despite what middle-class guys in their early-’40s might tell you, hip-hop isn’t some static genre that reached its peak in the ’90s and has only been going downhill since. It’s a creative art form, and like all art, it evolves and changes as time goes on.

Given its nature, obviously a lot of these stylistic changes come in the form of shifts in lyrical content and delivery. Of equal importance, though, are the beats: the timbre, energy and rhythms that drive and define the tone of the tracks. Because of this, prolific beat makers and rising producers can have a major effect on the sound of the genre as a whole. So, let’s take a look at some of the people currently making an impact...

There are a few producers who could lay a claim to being rap’s most important beat maker right now, but it would hard to argue against Metro’s claim to the crown. Need evidence of how in demand he is? When he recently announced his ‘retirement’ via Instagram, Gucci Mane reportedly stumped up a cool million dollars to persuade him to reverse his decision.

It’s not hard to see why rappers might go to such lengths to harness the power of Young Metro. Check out the distinctive, flute-rich beats of Future’s Mask Off, the tough, anthemic rhythms of Migos’ Bad and Boujee or Kodack Black’s Tunnel Vision. However, it was last year’s surprise LP Without Warning, a collaboration with 21 Savage and Offset, which really enabled Metro to cement his place at the top of the hip-hop hierarchy. Few producers can make so much with just a few heavy 808 hits.

Beyoncé’s Formation and Humble by Kendrick Lamar have proved to be two of the most important cultural artefacts of the past few years. The former is a defiant statement of empowerment that captured the zeitgeist and will perhaps prove to be the defining moment for one of the world’s biggest pop stars. The latter, meanwhile, provides the captivating centrepiece to an album that recently became the first non-classical release to win a Pulitzer.

While, clearly, much of what makes these records important comes from the voices of their lead artists, it’s also no coincidence that both had the same man behind the boards: Mike Will.

One of the most influential figures in shaping the modern Southern Rap sound, Mike Len Williams II has brought dark, hard-edged beats to the likes of 2 Chainz, Future and Kanye’s Good Music outfit. In many ways, though, he’s also a natural heir to Timbaland, in his ability to take his tough, creative sound and shape it around big pop hits. Just looks at his work for Miley Cyrus (We Can’t Stop) or Ciara (Body Party).

Toronto beat maker Noah Shebib isn’t the only producer Drake works with, but he’s easily been the most influential in shaping his distinctive sound. Along with his distinctive use of simple piano melodies, probably the most important element of 40’s production style is his tendency to cut a lot of the top end from almost every element in the mix, creating an almost eerie space to give the vocals room to breathe.

As he revealed in a video for Native Instruments a couple of years back, he achieves this effect not through filtering or EQ but with sample rate reduction, creating a degraded crunch sound akin to that of old-school samplers.

Drake - Shot For Me

Canadian producer Kaytranada perhaps doesn’t have the rap game clout of some of the artists on this list, but he deserves a place for his influential ability to skirt around the edges of hip-hop, RnB, funk, pop and dance music, while seeming to draw them all together.

His solo debut, the Polaris prize-winning 99.9%, might not strictly fall into the category of straight-up hip-hop, but its sound palette has certainly had an influence on the wider rap world. Whether he’s working solo, collaborating with distinctive vocalists like Syd or Anderson Paak, or remixing Solange and Rihanna, Kaytranada takes the beat-driven framework of hip-hop and manages to simultaneously tie it to classic funk and club-ready electronic music.

On top of all that, All Night, his collaboration with Chance The Rapper, remains one of the most joyous hip-hop tracks of recent times.

Chance The Rapper - All Night

Kendrick Lamar’s name keeps cropping up in this list, which is hardly surprising; not only is he arguably the most important rapper in the world at the moment, but he has a habit of surrounding himself with the most distinctive and interesting producers in the game.

While he might not be his best-known collaborator, Sounwave has probably had the biggest impact on Kendrick’s sound. As the cornerstone of Digi+Phonics, Top Dawg Entertainment’s in-house production team, Sounwave has worked with Kendrick throughout his career, helping to shape his rapid evolution from classic West Coast rap beats through Blaxploitation-funk to the more direct production of DAMN.

Most recently, he played a major role in shaping the sound of the critically-acclaimed Black Panther soundtrack.

Kendrick Lamar & SZA - All The Stars (from the Black Panther OST)

There’s no doubt that hip-hop production remains a male-dominated industry, but recent years have seen an increasing number of female artists emerging amongst the ranks. One of the most notable of those is Canadian Ebony Oshunrinde, aka WondaGurl.

A protégé of fellow Canadian Boi-1Da, Oshunrinde honed her talents as a teenager, throwing together ideas in FL Studio and entering beatmaking competitions. She supplied tracks to Drake after hitting him up on Instagram, and soon after landed a production credit on Jay-Z’s Magna Carta Holy Grail.

Still just 21 years old, Oshunrinde has already turned in infectious beats for the likes of Travis Scott, Rihanna, Lil Uzi Vert and Lil Yatchy. She’s definitely a distinctive voice, and a producer to watch out for.

Atlanta resident Pi’erre Bourne is one of the most exciting young names on the hip-hop circuit right now, and he seems to have his sights set on world domination. He made a big impact last year with his work with Playboi Carti, handling production duties on tracks including the anthemic Magnolia and Lil Uzi Vert featuring wokeuplikethis.

A graduate of Atlanta’s SAE Institute, he’s quickly become known for his attention-grabbing beats that make liberal use of plastic-sound flutes and quirky video game sonics. His list of upcoming clients is said to include artists such as 21 Savage and Drake. Oh, and he rap,s too, as demonstrated on his The Life of Pi’erre mixtapes. Expect to hear a lot more form Bourne in the next few years.

Odd Future figurehead Tyler Okonma is best-known for his controversy-courting lyrics and enigmatic oddball antics, but he arguably doesn’t get the props he deserves as a producer.

Not only has Tyler created beats for all his own albums, including last year’s Grammy-nominated Flower Boy, but he’s also been behind the desk at some point for the bulk of the wider Odd Future fraternity, including the likes of Earl Sweatshirt, The Internet and Frank Ocean.

Tyler’s inclusion here is down to more than just prolificness, though; he typifies a certain breed of modern DIY hip-hop artist, creating tracks that walk a fine line between radio-friendly rap and underground electronics. His beats skirt around the edges of micro-genres like Cloud Rap and Emo Rap, but regularly include synths and atmospheres that owe as much to Tangerine Dream as they do Dr Dre.

Another seemingly unstoppable up-and-comer, 24 year-old Ontario resident Shane Lee Lindstrom has worked with Drake, Gucci Mane, French Montana, Travis Scott and Migos. He’s proved himself to be a very adaptable producer already, though, with a skill for being able to flip between dark and hard-hitting and emotive and soulful, often within the space of a single beat.