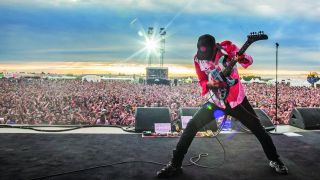 Best known as the guitarist in Rage Against The Machine and Audioslave, Tom Morello has also released music as a solo artist (both under his own name and as The Nightwatchman) and has played with many other artists, from Bruce Springsteen to Cypress Hill.

Besides his often highly politicised messages, his music is most notable for two main aspects. In his rhythm guitar playing; huge heavy riffs, and in his lead guitar breaks; the creative use of a small selection of effects pedals, kill-switching, and perhaps most famously the Digitech Whammy pitch shifting pedal.

Morello himself described his role in Rage Against The Machine as that of a 'DJ' and that's reflected in the constantly engaging dynamic between these facets.

From a back catalogue so deep, it’s hard to choose only five songs, but here are some genre-spanning cuts that really show off the best of Morello.

A huge-riffed modern classic that has developed its own cultural momentum that is seemingly continuing to grow as the song approaches 30 years old.

Riff lesson: Rage Against The Machine – Killing In The Name Of

In the rhythm guitar there’s a Morello trademark - a sequence of heavy riffs and variations on them that energetically drive the song to a huge climax.

In the lead guitar, another Morello staple - the creative, unusual guitar solo (at 3:50) utilizing the Digitech Whammy pedal to achieve both squealing, strained, melodramatic high notes and runs, and beautifully cranky, awkward, slightly ‘out’ notes from the pitch-shifting spectrum the pedal provides.

Audioslave being a little mellower than RATM meant an element of melodic simplification for Morello, something of which Like A Stone is a great example.

It begins with a very simple melodic riff, bunched into two-note phrases. A perfect canvas for Chris Cornell’s lyrical scene-setting.

The choruses are very restrained, once-strummed, block chord affairs, and the strummed acoustic mid section that comes in around 3:32, after the solo, is again a smooth execution of a beautifully simple idea.

Tom Morello: "This is missionary work. I’m on a zealot’s mission out there"

It’s the solo itself where Morello really stands out, using his expressive vibrato and his Whammy pedal to create something otherworldly, whilst retaining the song’s requisite melody and emotion.

Something really notable here is his long protracted sweep of the Whammy pedal, not just jumping straight to the shifted pitch, but crawling up to it using the pedal’s spectrum / expression capabilities. This creates a really nice sense of straining to reach a note.

Here's one of many examples where other artists featured Morello with the resulting sound being a creative hybrid.

The overdriven, phase-laden verse guitar part is almost funky, and when combined with the chorus riff, creates a guitar track that wouldn’t be out of place on RHCP’s Blood Sugar Sex Magik album.

Tom Morello shows us his Rage Against The Machine guitars

Morello’s trademark peaks of rhythmic interest, and his special way of injecting mellow restraint into energetic guitar parts, make this a fantastic canvas for Cypress Hill. This is most apparent in the guitar solo at the 2:30 mark. Morello creates an entire solo based around a number of overdriven slides, a liberal use of vibrato and bending.

Following a Led Zeppelin style intro (that returns as an outro), the riff that comes in from around 0:25 exemplifies another key element of Tom Morello’s style. This is that, it’s not just his using of effects that’s important, it’s his rhythmic using of effects - he brilliantly uses the sweeping, by-product sounds of the wah wah pedal to form part of the riff.

The other key guitar feature of this song is the solo, beginning around 2:32. On first listen, you’d be forgiven for dismissing it as ‘just random noise’, but on closer listen, it’s a sequence of intricate rhythms, designed to almost replicate one of lead vocalist Zack de la Rocha’s raps earlier in the song.

So overall, again what sounds like cranky, aggressive playing is actually concealing something more nuanced.

A ballad that probably represented the most melodic song on Audioslave’s self-titled debut album. It’s still highly energetic in parts, but makes no move into distorted riff-age.

It’s largely a song of melodic chord patterns, spiced up with some rhythmic emphasis and some textural overdubs, and a volume-swelling, organ-replicating intro section.

However it’s the solo, once again, that shows the best of Morello. And although he is using a digital delay to create a canvas of a solo - again, using the rhythm of the effects as much as the effects themselves - he’s not using the whammy pedal at all this time, perhaps deeming it too quirky.

As such, the solo has to show its sense of melody and its simple, though well-crafted harmony with the underlying chords and bass part. In essence - Morello shows he can cut it even without his trusted Whammy pedal!