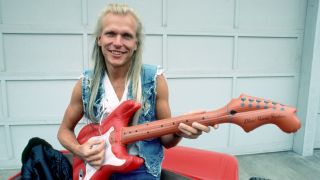 The German guitarist has been mentioned as an influence by the likes of Kirk Hammett, Adrian Smith and even the great Randy Rhoads and although his audience has become a tad more selective over the years he’s as vital a guitar force as ever.

It could be argued that he hasn’t realised the full mainstream potential his abilities merited – he was close to joining both Ozzy Osbourne and, inconceivably, Aerosmith at one point - but we’d suggest he’s done alright for himself. Check out these five songs as an introduction to his unmistakable talents.

Picking a favourite Schenker solo from his tumultuous time with UFO is a tricky task as it’s no exaggeration to say that every time he took a few bars in the spotlight his guitar had something incisive to say.

This is probably the best track from what turned out to be his final album with the band and he even appears on the Hipgnosis-designed cover artwork. His reputation as a gifted guitarist had certainly been established by then and the flowing solo speaks for itself, so it’s astonishing to know that Schenker came up with it on the spot.

"The funny thing is that it’s entirely improvised.” Michael confirmed to Guitar World earlier this year. “I’m sure when I first played [the solo], it didn’t sound the way it came out, "but it sounds so structured and so well thought out. It isn’t, though; I just improvised it in the studio.”

With UFO’s success growing drugs and booze became an issue, and as a consequence Schenker’s foundations began to erode; he jumped ship in 1979 just before the release of what is often cited as the best live rock album of them all, Strangers in the Night.

Compiled from shows from the American leg of the Obsession tour, Schenker plays wonderfully throughout and if you’re after a shortcut into what makes the man’s style so important, that album is a must.

Schenker’s first solo album, released in September 1980, was swept along with the burgeoning NWOBHM and the quality of both the songs and the musicianship cemented its status as a must-have album of the time.

Schenker was determined to find an unknown vocalist for the sessions and he struck gold when Gary Barden was unearthed from the mound of demo cassettes that had been sent to record label Chrysalis. The duo proved to be a potent songwriting partnership and the whole album is littered with great tunes.

Based around a gloriously meat-headed riff in E, Barden’s ebullient vocals give Armed and Ready a real sense of excitement and the solo is a succinct example of a trademark Michael Schenker workout. Once the album was in the can the twosome were joined by former UFO cohort Paul Raymond on guitar, ex-SAHB bassist Chris Glen, and Sir Cozy of Powell behind the kit and hit the road, whereupon the song became an instant classic.

6 guitar tricks you can learn from Michael Schenker

Barden was ‘let go’ in 1982 in favour of former Rainbow vocalist Graham Bonnet who himself was fired after a drunken, appendage-flashing incident during a MSG show in Sheffield. “I was playing, and then I looked to my right and there’s no singer.” Michael told Classic Rock of the episode in 2018. “So we ended up playing the whole show without Graham. And I never saw him after.”

Barden was quickly rehired in time to pull the band’s prestigious headline slot at that year’s Reading Festival out of the fire; the gig took place just five days later.

With record company demands for a calculated assault on the US market increasing, Scorpions mainman Rudolf Schenker bowed to recording company pressure and brought his brother back to replace the recently-recruited unknown, Matthias Jabs.

He played lead guitar on a number of tracks on Lovedrive, an album infamous for its ‘bubblegum boob’ artwork, and arguably the most revered is this meaty instrumental for which he provides some measured and melodic lines that garnish a immense rhythmic base.

The Fender Precision of Francis Buchholz is front and centre and although it sounds as if it’s Rudi who takes the main solo, it’s his younger brother’s embellishments off to the right of the mix that catch the ear, especially the lovely run just before the breakdown.

Still too fragile to endure the rigours of a working band, Michael quit in early 1979 mere months after he’d actually joined, forcing Rudi to scurry back to Jabs to plead for clemency. The latter relented and on the back of the popularity of both 1982’s Blackout and 1984’s Love at First Sting albums they did become a huge draw both in America and around the world. For Michael, a solo career was next.

Light’s Out is probably UFO’s best studio album and although the title track is a stone cold classic, the epic Love to Love proves that the band weren’t just about rocking socks off. Written by Schenker and fiery vocalist Phil Mogg, the song is assembled from complimentary layers of tonal flavours, the dextrous keyboards of the late Paul Raymond just one of the highlights.

A multi-tracked guitar intro precedes the Tubular Bells-like keyboard riff before the band revs up beneath a syncopated acoustic progression. An unashamedly proggy interlude then heralds the verse and sing-along chorus, and even though there’s a lot going on none of the myriad components are gratuitous; it’s just accomplished songwriting.

There are two guitar solos, one beautifully measured, the other a much looser and speedy affair, the emotion of which mirrors the climax of the story laid out in the lyrics. This is the stuff upon which Schenker’s reputation is based and it’s a shame it couldn’t last.

Another solid instrumental that features one unmissable facet of Michael’s technique after another and it’s well worth taking the time to get to grips them.

The fluid opening riff ushers in some surprisingly bluesy phrases that are offset by a watery keyboard line the comedic value of which is surely intentional, and from there it’s a series of anthemic melodies and classical runs that are brought to a fitting conclusion by a half-tempo, lighter-in-the-air finale.

Schenker’s use of a half-cocked wah is apparent throughout and the technique is an effective method of adding dynamics to a guitar tone. Just about any brand of wah should be suitable and all you need is an ear for subtlety and a reasonably strong ankle to exert the right level of control over the treadle; try it and see.

MSG disintegrated in the mid-eighties and Schenker subsequently formed a partnership with Irish singer Robin McAuley to produce three sturdy albums that were full of eighties rock histrionics, some impressive hair extensions and, needless to say, bundles of great guitar. You can’t keep a good man down.