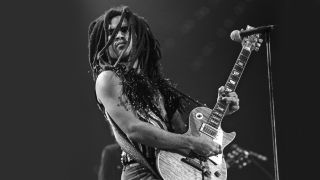 There’s been no shortage of guitar heroes over the decades, but every now and then, a musician comes along who is gifted with not only the ability to keep up with some of the greats on one instrument, but a whole band’s worth. If they’re really talented, they can also sing to a world-class level and write songs that are good enough to become global hits. Lenny Kravitz is one such person.

Having grown up on a diet of the classics of ‘60s and ‘70s rock ’n’ roll, funk and soul, Kravitz clearly has the knack for being able to soak up everything he’s heard, process it and pump out songs with influences of all of your favourite bands.

Whether it’s the songwriting chops of The Beatles, the fuzzed-out psychedelia of Hendrix, the soulful groove of Stevie Wonder or the hard-hitting classic rock riffs of Zeppelin or AC/DC, there’s something for everyone in his back catalogue.

While he might be a polymath who could hold his own in a list of great players across the instruments on his recordings, it’s the guitar that he’s best known for. So, here are five key Kravitz tracks that all guitarists can learn something from.

Armed with a Gibson Flying V (for the video) and a unison riff that would become his calling card, the lead single from his third album gives you a perfect cross-section of Lenny Kravitz.

First up is that riff - sounds simple, but the timing of the string bends and pull-offs create an integral part of the rhythmic phrasing that you need to get right. Backed by a Motown-style beat and plodding bass, it’s oozing with retro-rock and soul vibes.

By this point, Lenny had made guitarist Craig Ross an integral part of his live band, also draughting him in during studio sessions on some songs. Ross takes the solo while Lenny holds the anticipated-accents on the rhythm part, which is also an excellent use of a flanger - on the entire mix as well as the guitar!

But what about nailing that fuzzy guitar sound? Lenny told Guitar World in 2014, “Are You Gonna Go My Way was a little different. There were so many amps on the album that it’s hard to remember all of them. But on that song in particular I used a Gibson Skylark, a little tiny amp that has the most brilliant sound. And the guitar was a Les Paul—not the Flying V that’s in the video. Oddly enough, I’ve never used a V in the studio, even though I’m so associated with that guitar.”

Always On The Run is a slice of funk-rock that wouldn’t sound out of place on a Red Hot Chili Peppers album. The James Brown-style one-chord groove weaves around the bass with a dual guitar part comprising chicken picking and a sliding funky Em7 chord in the verse, before giving way to the Hendrix-style rising G to A release in the chorus. But as longtime Kravitz fans will know, Lenny got a little help from his old school mate for this one.

“I went to the American Music Awards and Guns N’ Roses were getting awards [for Appetite For Destruction] and they were sitting in front of me," Kravitz told us last year. "He and I just kept looking at each other like, ‘I know you…’ Not ‘I know that you’re Lenny Kravitz and you’re Slash’ - but, like, ‘I know you.’"

Slash recorded a guest solo on Kravitz’s Fields Of Joy, and the two former classmates decided to write a full song together.

“We started to jam and that riff to Always On The Run ended up coming out. I actually think he had been honing it before he got there. The song just wrote itself. To cut the track, he played the riff, I was on the drums.

"So it was just guitar and drums - that was it - and we got through the take and then I played my guitar part, which is the counter-rhythm part. Then I played the bass. He played his solo and then I wrote the horn arrangement, had the horn players come in and that was that. Did the vocals. It was a great session. Really fluid, it was very quick and spontaneous. That’s how that went down.”

If Are You Gonna Go My Way tips its hat to Hendrix, then we’d say there’s a heavy nod to Zeppelin on Rock And Roll Is Dead. Kravitz once again recorded the lion’s share of the instrumentation on fourth album, Circus, and has previously stated that the making of the record was far from easy.

Rock And Roll Is Dead stands out as an impossibly catchy riff, though, and given that it was released in 1995 sounds timeless thanks to the lack of processing: the raw, surprisingly clean tone allows the funky chromatic notes to punch through like you were stood in the room.

Kravitz shows the importance of fret-hand muting and accuracy as he belts out the riff and takes a trip to the dusty end of the neck for the interspersed chord with ease. It’s easy to forget just how many belters Lenny has written over the years, and while it’s a riff that matches up to some of Morello’s finest, it often remains a deeper cut in the ‘Greatest Riffs Of All Time’ lists.

First off, long before this song was co-opted by advertisers to remind you to book your summer holiday, it was an instant modern-classic for bassists everywhere, dripping with its slapped, auto-filtered funk. But this list is for guitarists, so what gives?

Well, not only is it a huge hit from Lenny’s fifth album, 5, and one of his biggest songs to-date, but it’s an impeccable lesson in songwriting economy. Four chords is all it took for Mr Kravitz to write an anthem on the bring of the new millennium, and he used a progression we’ve heard hundreds of times before.

But it’s the rhythm playing that makes what could be another boring use of a cliched chord progression interesting - perhaps even inspired slightly by Kravitz’s cover of The Guess Who's American Woman from the same album.

Songwriting insights, jams with Slash and Prince, and tonal tidbits from the guitar star

Another lesson to learn here is that inspiration can come from your gear, and when it strikes, it’s important to listen. “That song ended up becoming a major hit for me” Lenny told Guitar World in 2008. “The album was done and I happened to be in the studio trying out an amp, a Park head, that someone brought in for me to check out. I set it up, grabbed a guitar that was in the studio, and, as you know, some guitars are just juicy in certain places on the neck, depending on the instrument.

"You find that spot where the chord really jumps out. I started to play, and the guitar led me to those barre chords, and that was that. I was listening to the way different chords were ringing, just moving between A, C, G and D, and the next thing I knew I was telling the engineer to hook up the mics and record.”

Wait, no big riff? No cranked amp or snappy funk? There’s another side to Lenny Kravitz’s writing style: the stripped-back, let-the-song-do-the-talking, ballad side.

While songs such as Let Love Rule feature some Beatles-esque R&B guitar rhythms and harmonies, and Believe sounds like Stevie Wonder sitting-in on a Lennon solo session (with a lovely outro guitar solo from Craig Ross) we think It Ain’t Over ’Til It’s Over is a better guitar-y example of Lenny’s more soulful side.

Featuring strings and even a sitar, it’d be easy for the guitar to take a back seat on this one, but Lenny’s clean chords keep the tune ticking during the verses. Jump to that achingly smooth solo (without a hair of gain) and it all adds up to some classy playing, without distracting from the song itself.

We’ll let the man himself have the last word: “I just love music, and, to me," Kravitz told Guitar World, "it all goes together. I’ve never been the kind of artist that sticks to one sound. A lot of records have the exact same sounds, atmosphere and concepts throughout. I’ll go from A to Z from one track to the next. That’s because when I write a song, I’m not thinking about an overall style; I’m thinking about the song, and the style and sound have to complement the mood I’m trying to convey…

"The key for a guitar player is to listen, think and ask yourself, How can I compliment this track, and not just take it over?”