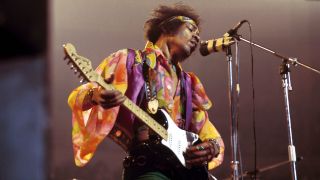 Jimi Hendrix is often considered to be the greatest guitar player of all-time, and it's difficult to make a case against it. For any aspiring guitarist, it is difficult to overestimate impact that Hendrix had on the instrument – the term 'ahead of his time' barely does Jimi justice.

Hendrix's use of distortion, wah pedals, gigantic whole-step bends in unorthodox playing and high-energy stage performances set a pioneering benchmark… but most importantly he left a legacy of songs that resonate fifty years after his death.

Here are five of them; songs every new or experienced guitar player needs in their lives.

Hendrix greets his would-be followers with heavily-overdriven guitar tones that were mostly made up from his signature chord phrases. So much so that Hendrix’s use of the Dominant 7#9 chords eventually became what some guitar players colloquially call the “Hendrix chord.”

In Hendrix’s performance at the Atlanta Pop Festival, audiences can also see the guitarist’s unorthodox style. Jimi liked to wrap his thumb over the top of the fretboard to play notes on the low E string. You can also hear and see Hendrix play the E7#9 chord at the beginning of the verse here.

Though Hendrix is well known for his high-energy, roaring guitar tone; the title track to the Experience's second album (and second of 1967) reveals a softer, more refined side of the Hendrix tone.

Yes, there is still a driven guitar but it’s a bit more melodic and restrained. Hendrix also blurs the line between lead and rhythm roles – another of his legacies as a pioneer. He uses licks and fills to provide a rhythmic role rather than a series of chord progressions.

Under the visionary techniques of engineer Eddie Kramer, this song is also one of the first experimentations with phasing in guitar music, as heard on the latter half of the song. The solos use the phasing effect to find Hendrix's guitar in the centre of something that sounds much larger than the three-piece band he was a part of.

Bold As Love did a great and grand job of closing out the Axis: Bold As Love album, however, right in the middle of the Jimi Hendrix Experience’s second album was this little gem in which many consider to be the greatest music the group had ever produced.

This is Hendrix slowing down but at the height of his powers. He uses a wealth of chord stabs and rhythmic fills to perfectly complement his vocal and the guitar solo is reserved until the end when all three musicians explode into a heavy, rhythm-and-blues outro.

The guitar solo here is sharp, melodic and emotional; it’s Jimi playing and singing from a place of vulnerability and listeners can absolutely hear this in the tone. Hendrix’ play style on this track has been cited as influenced by the likes of Curtis Mayfield, whom Hendrix toured with before his time with the Experience.

Hendrix took Bob Dylan’s acoustic number and electrified it with a series of licks, riffs, and three sublime guitar solos. He attacks the verse with a number of flourishes and fills that shine but never overpower the vocal line. This goes a long way to show Hendrix's balance restraint and understanding of musical nuances with musical explosion that would follow his guitar breaks.

The trio of solos here are a crowning achievement. The first solo has Hendrix dancing around the fretboard but not yet fully committing to his attack; it’s as if he’s teasing the audience here with a series of bends and hammer-ons. During the middle solo, he uses a slide which leads into a wah-filled series of notes before jumping into a double stop riffs. The final solo ups the ante again with unison string bends and super-fast 16th-note picking. It's a masterclass in solo storytelling.

Hendrix brought the use of the wah pedal to another level of expression with this track. The song itself was developed from another song from the album, Voodoo Chile, and was mostly created from a jam Hendrix had with his band during a documentary filming.

The 10 best Fender Strats to buy

It begins with a a percussive wacka-wacka wah sound before its wonderfully simple riff starts low key before taking flight as full-blown psychedelic but concise blues rock that set a high water mark others are still trying to rise to.

This is quintessential Jimi Hendrix; the thundering, relentless chords in the key of E harking back to early delta blues, while the use of distortion and fuzz elevates the chugging riffs. The solos scorch and screech into the stratosphere in this masterclass of electric guitar.