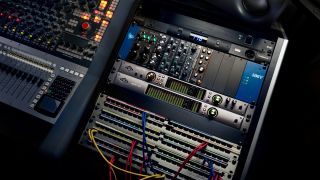 Given that many of them look fairly similar, it’s tempting to think that all audio interfaces are born equal. However, this couldn’t be further from the truth.

Universal Audio’s Apollo X is a case in point. Available in four I/O configurations, these are not only the most powerful Apollo devices ever. but they also offer a number of features that you won’t find anywhere else.

Perhaps most importantly, the Apollo X devices enable you to track your audio with real-time processing. If you’re not sure what this means or aren’t convinced of the benefits of doing it, allow us to enlighten you…

Any audio interface’s most important job is to get great sound in and out of your computer, and the Apollo X is a class leader in this regard. Each model offers the latest A/D and D/A converters, which were honed by Universal Audio’s engineers, as well as all-new analogue circuitry for a pristine signal path.

If you’re looking for numbers, consider that three of the Apollo X models offer 129 dB dynamic range and -119db THD+N, with the flagship Apollo x16 raising the stakes still further with 133 dB dynamic range and -129 dB THD+N. If these specs don’t mean anything to you, just use your ears and you’ll be convinced.

2. More power than ever before

All of the Apollo X interfaces feature HEXA Core processing, with six DSP chips inside. This means more grunt - 50% more than in previous versions of the Apollo, in fact - so you can run more UAD powered plugins and make your recordings sound better than ever.

And, don’t forget, more DSP in your interface means that your computer’s resources are freed up to perform other tasks, meaning better overall system performance.

Most audio interfaces come with a mic preamp or two, but only Universal Audio’s have Unison technology. This is designed to emulate the tone of classic tube and solid-state mic preamps, including input impedance, gain stage “sweet spots” and the component-level behaviours of the original hardware.

This is software and hardware working in harmony; place a Unison preamp plugin on your mic input in the Apollo Console software and it actually reconfigures the interface’s impedance, meaning that you get the perfect sound every time. Clever stuff.

We’ve talked about the technology that powers the Apollo X interfaces, but what of the UAD plugins that you can run on them? These are some of the best on the market, and you get a choice selection in the box.

The Realtime Analog Classics Plus plugin bundle contains exclusive emulations of the Teletronix LA-2A, 1176LN and Fairchild compressors, the Unison-enabled UA 610-B Tube Preamp & EQ, and iconic guitar and bass amps from Marshall and Ampeg. So, whether you’re recording vocals, guitars or anything else, you’re good to go.

What’s more, you can commit to these tones at the recording stage, saving you valuable time when mixing and giving you an ultra-efficient workflow.

5. You can expand your horizons

All of the Apollo X interfaces come with everything you need in the box, but this is just the start. You also have access to the full UAD Powered Plug-in library, so whether you want more vintage EQs, compressors, reverbs, tape machines, channel strips or other processors, you can get them. What’s more, these operate at near-zero latency, so when you record through them, it’ll feel just like you’re using the original hardware.

Oh, and if one Apollo X isn’t enough for you, you’ll be pleased to learn that you can add more UA interfaces and UAD-2 devices to your setup via Thunderbolt. Rest assured that you’ll have all the I/O and DSP that you need - all you need to do is decide how to use it.