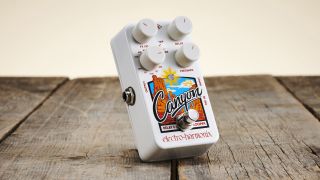 Besides a decent boost, drive, distortion or fuzz pedal, a delay is the effect that most guitarists lean on. Delay creates an echo or repeat of your guitar sound, and is a great pedal for creative guitar players. The question is: are you getting the most out of yours?

Whether you're using a U2-sized pedalboard, something more modest in the vein of Brian May or Matt Bellamy, or you're looking for a more spaced-out Ed O’Brien/Jonny Greenwood vibe, we've got some tips and tricks that could revolutionise how you use this most versatile and exciting of effects.

With analogue delays in particular, if you raise the feedback enough, the pedal will move into auto-oscillation, with an overlapping cacophony of delay cycles roaring out of the amplifier.

This can be done tastefully, like the tape echo oscillation at the end of Radiohead's Karma Police; or for dramatic effect, like the scorching oscillation in Swervedriver songs or the creepy intro of Oceansize's Sleeping Dogs and Dead Lions.

Some digital effects will oscillate, too, depending on the pedal. Others will just repeat the same passage over and over again in an infinite loop, since digital delays are, in effect, just a looper.

This style can be heard at the start of Bloc Party's Like Eating Glass, where a Boss digital delay with the feedback maxed repeats the same reversed note.

Building on the oscillation trick, using a short delay time and maxing out the feedback control can result in a rapidly rising squall of noise that can be used to punctuate riffs or create a dramatic end to a section of a song, or even a set.

Digital pedals often do weird things at the extreme ends of their parameters, and, depending on the pedal, you might find bitcrushing or even sounds like an old-school modem.

Typically, delays play their captured passage forwards. However, with a lag to accommodate the loop size, digital delays can play a reversed version of their input.

Reverse delays tend to end up interfering with the dry signal a little less, and the result is that they're often better for ambient or atmospheric work, padding around the notes being played rather than acting as the centre of attention.

If you're tremolo picking a lot - for example, in post-rock riffs - it's worth trying a reverse delay. They're not exotic or rare, either. Most Boss delays since the DD-6 have a reverse function, as do other workhorse delays like the Line 6 DL4.

Quite often, digital delays will have a stereo mode, although what exactly this means will depend from pedal to pedal. Some simply run the single to two outs, which is not exactly thrilling, but so-called 'ping-pong' delays bounce the repeats back and forth in the stereo field, from left to right or vice versa.

There are also more advanced versions, for example modulated delays where only the modulated trails are moved in stereo, or multi-pan delays where a pan might go left, right, centre, in cycles. A five-tap version of this is used by John Petrucci of Dream Theater in his live rig.

As digital delays are effectively just special-purpose loopers with a controllable buffer size, plenty of players have found ways to abuse this function.

Some delays will allow you to recycle a buffer endlessly, as with the Like Eating Glass trick mentioned before, while others will have a 'sample' or 'hold' mode that allows you to capture a small loop.

However you get to it, the 'stutter' effect is where you unleash a rapid machine-gun chatter of short loops of a sound. It's incredibly common in glitchier guitar playing in experimental rock - for example, in math-rock circles - and you'll hear incredibly musical examples of the 'stutter' sound in the work of bands like Giraffes? Giraffes!, And So I Watch You From Afar, and Adebisi Shank. And So I Watch You From Afar's second album Gangs is chock-full of great, expressive delay tricks used as punctuation between riffs.

You'll even occasionally hear the telltale delay 'stutter' in metal – for example, at the end of Masamune from Periphery's second album, Periphery II.

As discussed above, a lot of modern delay pedals explicitly incorporate a looper function, and larger units like the Boss DD-500 or Strymon Timeline have a dedicated looper as good as any standalone unit.

Building up songs or passages from loops is a bit of a black art, but it's worth trying at least once. Of course, for real loop wizardry, one-shots and time manipulation, it's worth checking out the pedal that started it all: the Line 6 DL4.

Ever wondered what happens when you run one delay into a second delay? Well, it's how a lot of atmospheric and post-rock music gets made. The interplay between the delay length of the first and second delay, as well as whether they're forward, reverse, mono or stereo, will determine whether you get a roar of delay or a gently diffusing pad sound.

Ambient musician Andy Othling has some excellent tutorial videos about this on YouTube, should you want to dig deeper.

A number of musicians have experimented in the studio and live with the idea of parallel delay lines. So what does this mean? Simply put, it's two separate delays, with potentially different characters, feedback and time settings, panned separately on record, and run into separate channels of an amp, or separate amps live.

Although it's obviously expensive and cumbersome to run two amps live, some amps, like the 1980s Fender Twins, have two sets of inputs, so you can run a parallel setup using one amp and two delay pedals.

Another way to get a parallel setup on the - relative - cheap is to use a Boss DD-500 with the firmware updates, which allows you to have two separate patches enabled at once, panned hard left and right.

A parallel setup is dense and psychedelic, with extra clarity over stacked delays from keeping the two delay lines separate.

9. Using delay as an instrument

Particularly in electronic music and sound design, it's common to use delays in an audio workstation almost like an instrument to accent and manipulate parts, while live it's common for keyboard players and some experimental guitar players to put delay pedals on a table and manipulate the knobs while signal is going through the pedal.

The results can be dramatic, and sometimes not very musical, but they're rarely boring.

The final trick we have for you is the most simple of all. Many delay pedals take an expression input, and especially on the larger digital units it's possible to specify which parameters are controlled by the expression.

If you've got the pedalboard space, an expression pedal can breathe new life into a delay and make it a rich, expressive performance tool.