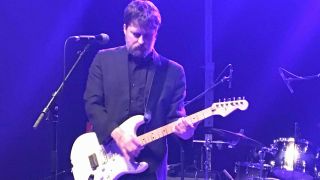 Ben Chasny has a restless musical spirit, but one that utterly possesses whatever project he sets his mind to, from Rangda to Comets On Fire, Coypu and his work with the likes of Current 93.

Away from his electric work, Six Organs Of Admittance is the man's primary outlet, ably channeling the intricate fingerpicking of British folk legends such as Bert Jansch and Nick Drake.

As he releases new album Burning The Threshold, we caught up with Ben to find out why there's never been a better time to learn to play guitar and why you should be extremely careful with your onstage beverages…

“Well, I like to be able to play without any pedal at all, acoustic or electric, so there's no pedal I can't do without. But, if the question was, what is the one pedal you own that you would never want lose, that would be my Lastgasp Laboratories, 88-Super Oscillo Fuzz.”

“You know, I think I've been pretty lucky with not getting rid of any gear that I would later regret.”

5. When did you last practice and what did you play?

“Just this morning I was trying to get down a Pierre Bensusan run. Maybe that is more learning a song, but I was trying to drill it into my head, so I will count it as practice.

“I think we're living in an incredible time for resources for guitarists, especially with YouTube. Some of my favourites are those '80s shredder VHS tapes that people have put up, especially Marty Friedman and Paul Gilbert. I'm nowhere near any sort of shredder, but you can really pick up little moves and adjust them to your own style, such as Paul's technique of jumping octaves to create arpeggios.

“Those guys also seem like humble, nice dudes. Another favourite is Pebber Brown. Pebber for president! If those resources had been available when I was a kid it would have been a whole different world. That's not even to mention the wealth of acoustic, fingerpicked manoeuvres on there.”

“I wish I could play gypsy jazz-style guitar better.”

“One time I was bringing a glass of wine with my right hand to my mouth, but it hit the microphone instead and spilled into my electronics on my acoustic. I wasn't even drunk. It was my first sip!

“At first, things seemed fine, but after about five minutes, in the middle of a song, the most insane high-pitch squeal started to emerge from the guitar. The wine had created connections that should not have been connected. Luckily, we were able to open it all up and clean it out before too much damage occurred.”

“Don't drink wine onstage when playing the acoustic, no matter how cool Pentangle made it look.”