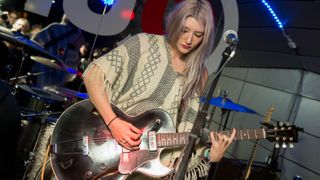 Queen Kwong (aka Carré Callaway) has had a tumultuous journey to new album Love Me To Death.

After being discovered by Trent Reznor, a teenage Callaway ended up supporting Nine Inch Nails as a solo artist on their 2005 With Teeth tour. Several years away from music followed, before the release of the songwriter’s gritty full-band debut Get A Witness in 2015 as Queen Kwong (also featuring Callaway’s now-husband, Limp Bizkit guitarist Wes Borland).

Earlier this month, Callaway was diagnosed with cystic fibrosis, leading doctors to suggest she “tone it down” and cut back on travelling. As she points out, "this should make you really want to buy my record and make the extra effort to come to my shows" - as if any were needed, given new full-length Love Me To Death's winning formula of dreamy vocals, woozy synths and blasts of delay-heavy guitar.

Ahead of the release, we quizzed Callaway on her choice gear picks and why that NIN support slot wasn’t entirely plain sailing…

“My grandpa gave me a cheap Fender Squier when I was 12.”

“Wah pedal, just because nearly every song I write requires one in some way.”

“An acoustic Larrivée that I sold on Craigslist 11 years ago, when I was desperate for money for rent.”

“I’m not sure what the name of it is. Teaching myself guitar has made me find chords I like, just by ear and experimentation. But I’ve never learned all of their names.”

“Jack White and Jamie Hince always have unique, experimental tones that I’ve appreciated and been inspired by.”

“Ron Asheton in the late '60s/early '70s - because he is king of simple yet ferocious and innovative.”

“Getting off timing from a programmed drum track when I was opening for NIN by myself, when I was a teenager. I finished the song without singing the entire second half of it because I was so lost. I never used drum tracks again.”

Love Me To Death is out now via Edison Sound.