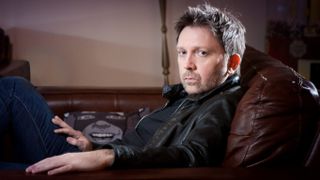 UK readers of a certain age will remember ’90s Chester alt-rockers Mansun, who released a trio of expansive studio albums - all of which showcased a greater sonic ambition than many of their Britpop contemporaries - before parting ways in the early noughties.

This year, the band’s frontman and guitarist Paul Draper channels the future and the past for his forthcoming tour, where he’ll perform Mansun’s debut, Attack Of The Grey Lantern, in full, as well as triumphant new solo album, Spooky Action, which hit the UK top 20 last year.

Before he packs his suitcase for the extensive run of dates, we caught up with Paul to get the lowdown on his guitar loves over the years, his favourite chord and concealing his passion for EVH-style widdling…

“I got a Boosey & Hawkes Spanish classical acoustic for Christmas when I was 10 and started learning myself; I'd become obsessed with Top Of The Pops and The Beatles and wanted to play the guitar.

“I became so obsessed with the guitar that I got a Squier Japanese-made Telecaster for my 13th birthday, which was black with a black scratchplate - I kept that guitar for a decade and played it through a Custom Sound Cub 60 amp that I got for my 15th birthday.

“That was my setup until I wanted to put Mansun together, then I bought my first guitar I used as a professional, which was a black Les Paul Standard - I used it right through my days in Mansun, and it's now owned by a fan. It had the neck snapped a few times, but as Les Paul owners know, it’s repairable!”

“As the Casino is my all-time favourite guitar, the most stable model is the Lennon Ltd edition reissues, which are 99.9% as good as the original. I’ll be playing this as my main guitar on my upcoming tour. There are only 1965 of these guitars in the world - I think Paul Weller has most of them!

“I previously owned a Revolution Casino but didn’t think I'd tour live again... how wrong I was. I couldn’t get my new 1965 Casino set up in time for my first tour last year, so I used my Fender Special Run USA Tele Thinline ’72, which I love and did a great job. However, it will have to take its place as my back-up guitar for the Attack Of The Grey Lantern tour as the 1965 Casino is ready to go. I can’t wait to play it live.”

“The Boss analogue delay pedal, the purple one [DM-2/DM-3]. I think it has a lot more character than the Boss digital delay and is always in my guitar chain, however subtle when recording. I played all the guitars on my debut album, Spooky Action, and this was the most-used pedal. Although more subtle than you might think, I use it as a glue in the arrangement of a guitar part to sit in a mix.”

“TC Electronic Fireworx. That was the guitar effects unit we used most on Mansun’s Six album. We used that box to death and is still to this day an exceptional effects unit. I loved it so much, I borrowed one and did a crazy guitar solo on a track on Spooky Action called Who’s Wearing The Trousers. That crazy noise in the middle is actually me playing a guitar solo through a TC Fireworx.

“I’ve still never used anything as crazy and innovative on guitar, and wish I’d have kept my original unit. I might buy another one, as I still don’t feel I’ve delved deeply enough into this unit.”

“I've just bought a WEM Copicat and am in the process of rebuilding a Roland 501 Space Echo, which will be the next piece of kit I put to use in my studio.

“I borrowed a 201 Space Echo to use on Spooky Action, and my engineer PDub has an RE-101 Space Echo, so we’ve used the different models of this unit a lot. It’s incredible for feedback and slowing and speeding things up with. I don’t just use the Space Echos on guitar, but I use it on vocals, Vox Continental II and synths as well, however the 501 Space Echo will be the next thing to go into my studio.”

“Fma7(#11) - basically F, with the B and top E open. Strum that a few times and then press the B and top E onto the first fret to make a proper F shape. Get that going then do the same thing on the 5th fret. There you have the origin of Wide Open Space, and I’ve used Fma7(#11) or at least the shape of that chord on different frets to write many a song.

“It’s great as you can slide the chords round quickly, and keeping the B and top E open add harmonic content to the chord. It’s great on the 8th and 10th fret too. Slide them around and you’ll get a song out of it - I’ve certainly got a few!”

“I really lost my scales discipline while I was in a band. I turned to moving chords around and writing songs as my main focus on the guitar. However, I've got the discipline back of running up and down the neck playing major and pentatonic scales again.

“I threw one big guitar solo into Spooky Action on a track called Feeling My Heart Run Slow, but it was a bit tongue-in-cheek to be honest, just showing off a bit - I’m no Guthrie Govan! A teenage friend of mine posted a video on YouTube recently of me as a teenager playing my black Squier Telecaster in his bedroom, and although a bit murky, you can really hear me tearing up and down the frets giving it my best Eddie Van Halen impression - then being in an indie band, I sort of hid I could do that.

“My guitar hero as a teenager, Prince, was such a big influence on me and introduced me to the styles of guitar played on old James Brown records, and Hendrix riffs. I’d throw the odd influence in on Mansun records like the M8 of Stripper Vicar, but that’s as funky as I’d take it.”

“Oh, it would be Prince. I know what his influences as a guitar player are: Parliament, P-Funk, Hendrix, James Brown records; however, he put them all together and made his own sound. The notes he chose on certain records like Joy in Repetition of Computer Blue are staggeringly melodic compared with straight-ahead blues playing.

“I think he showed his class when he performed While My Guitar Gently Weeps with Danni Harrison and Tom Petty - that’s what I love about his playing: not the speed, but the dark melodic notes he chooses. He’s my ultimate guitar hero.”

“Once, we played at Hogmanay on Prince's Street in Edinburgh. All our guitars were on radio packs. For some reason, the bass player's pack tuned into the Tannoy system around Edinburgh city centre, so the whole of Edinburgh was drowned out by one massive bass part, while the people in front of the stage heard no bass coming through the PA. Everyone was looking at us funny, while the people on the streets behind all had their fingers in their ears. We finished the gig, but not our finest moment.”

“Stick with those scales. One piece of advice I’ve given to the lead guitarist in my band, Ben Sink, who is a really creative lead guitarist, is to continually play scales going from the bottom to the top of the neck and back down, then switch scale and focus on doing it as fluid and speed up as you go. This isn’t to be Eddie Van Halen; it's because when you go on stage and the adrenalin kicks in, you’ll be so proficient as a craftsman that the nerves you feel won’t interfere with what you play: everything will seem in slow motion and you’ll feel better able to cope with the pressure of going on stage when you’re playing within yourself - in turn, you’re less likely to make mistakes.

“This is just my theory but being disciplined with your scales pays dividends when you get up on stage; even though you might not play them, and certainly not at the speed you should be getting up to while practising.”

Spooky Action is out now on Kscope. Paul Draper tours the UK in February/March: