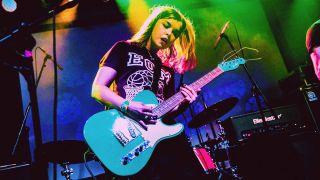 There are very few EPs whose titles we agree with more than the latest effort from UK fuzz-rockers False Advertising - I Would Be So Much Happier If I Just Stopped Caring.

Yet the Manchester-based three-piece provide a host of reasons to pay attention, not least the guitar work of Tele-wielding Jen Hingley - the niece of Inspiral Carpets frontman Tom Hingley, no less - who delivers the kind of riffs that will have fans of ’90s alt-rock digging plaid shirts back out of wardrobes.

Ahead of the band’s upcoming UK tour, we caught up with Jen to hear all about her priceless guitars, Big Muff love and the dangers of swapping instruments mid-gig…

“It was a three-quarter scale white Vox Meteor from the ’60s. I'm not sure exactly where it came from as my dad is a serial guitar collector, but it appeared when I was about four years old. I don't think I really knew what to do with it at the time, but it definitely looked cool!”

“It's gotta be my Seafoam Green limited-edition Fender Telecaster that I've had for a year and played pretty much exclusively. That thing has been with me through some absolute times - it would be a shame to lose it under such sad circumstances.”

“I want to say something cooler and more boutique like the Z.Vex Fuzz Factory (it's my favourite, but can't find a use for it on my 'board outside of the studio), but it's actually got to be the Big Muff. We have three fuzz pedals on the 'board and it's the only one I would never consider changing.”

“I've hardly ever really gotten rid of anything music-wise, which means our practice room and my flat is always a mess. I can't even bring myself to part with things I don't even want any more - for example, I have this Gothic SG with humbuckers on it, which is far too metal for our sound, that I need to do something with soon. I'd happily trade that for a normal SG if anyone's interested!”

“I've really never thought about this until now. I wouldn't say I had a favourite chord, but I have favourite chord shapes. I tend to stick to either very simple, two-note chords. Or, in drop D, I tend to play a basic shape, but missing out the 5th and switching it with the open string and/or the octave above.”

“I'd love to get faster at getting new parts for songs up to scratch and ready to play live. I find I can push myself to write better, more imaginative guitar lines when writing and recording, but rehearsing new material alongside the vocal part always takes a very long time to get right. I'm reminded of this whenever we play a new song live for the first time - I'm always guaranteed to make about 1,000 mistakes.”

“Is a laptop cheating? Oh, I suppose you wouldn't be able to charge it. If it can't be anything electronic, then I'd just go with a big old notebook and pen. I think with the intense boredom I could probably find a way of writing music in my head and transcribing it into some sort of notation.”

“If you know anything about False Advertising, you'll probably know that Chris [Warr] and I switch places between drums and guitar. I was drumming my part of the set this weekend at a festival in Hull, and mid-song, hit the end of my left index finger against a drum. The pain and amount of blood was so bad that when we switched back to me being on guitar I actually couldn't play, then had to return to finish the set back on the drums. Not before being escorted to the first aid tent. Not my finest moment - I still can't bend my finger, actually.”

“You know what's good and you have no reason to doubt yourself. Keep your imagination and just start writing; that's the thing that takes the longest to get good at.”