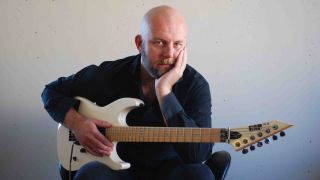 Outside of his crushing playing with Swedish heavy metal stalwarts Soilwork, David Andersson deals a mean hand in soaring classic-rock melodies and harmonised guitar solos with The Night Flight Orchestra.

True to form, the classic-rockers' recently released third album, Amber Galactic, provides another showcase for Andersson's judicious balance of melody and technique, no matter the genre.

Here, the guitarist goes deep, letting us in on his gear philosophy, Japanese stage tech trouble and why a ring mod is the only pedal he needs…

“My first electric guitar was a JBX Les Paul copy with a maple fretboard and a transparent mahogany finish, which made for an unusual twist. I got it when I was probably around 10 years old. It was made in Japan and actually a really good guitar, which I didn’t understand back then. But I started using again in my late teens, and modified it with one of those horrible poisonous green DiMarzio pickups and scalloped the last four frets on the fretboard. It was stolen after a show at a local festival in Sweden in the mid '90s, and I still miss it.”

“I have a red American Fender Stratocaster that I bought in '97, but it was made in '96. We had a break-in at our rehearsal space, and all my guitars were stolen. I had a gig the same week, so I had to get a new guitar. I was a young slacker without a steady job and very limited funds. I went to the local music store and tried all the guitars that I could afford, and this one really stood out. So I took all the money I had, around €700, and bought it, then I had to wait to get paid for the gig before I could buy food again, but it was worth it.

“I’ve since put in Seymour Duncan JB Jrs in the neck and saddle position, otherwise it’s still original. It’s a fantastic guitar, and I’ve used it for at least a few parts on every record I’ve done since I bought it, even on a few Soilwork tracks. For a long time it was the only guitar I had, and I could still probably manage with only that one. And, of course, there are a lot of sentimental reasons as well. Whenever I play it, it reminds me of my care-free youth.”

“I usually hate pedals when playing live - I don’t even switch channels on the amp. I just go straight in via a tuner, and when I need a clean sound, I just turn down the volume knob on the guitar. It takes away so much from the overall feeling if you have to tap-dance on a bunch of pedals, and besides that, no-one really hears the small details live anyway.

“But the one pedal I actually enjoy using live, and especially in the studio, is my Way Huge ring modulator. I’ve always loved the sound of ring modulators ever since I first heard Miles Out on Mahavishnu Orchestra’s Inner Worlds album as a teenager. It’s just so totally disharmonic and out there, in the most beautiful way. So when we got an endorsement deal with Dunlop a few years back, it was the only pedal I wanted. It’s all over the last two Night Flight Orchestra albums on almost every song, even if most people probably think it’s a synthesizer. It’s on the latest Soilwork album as well.

“The other guys aren’t always big fans when it comes to my ring modulator habits, but they’ve learned to live with it. Compared with most guitarists, I’m quite easygoing and don’t really care much about guitar sounds or the guitar levels in the mix, but I throw a tantrum if they don’t allow me to put some ring modulator on there. I guess it’s a terror balance that both sides benefit from.”

“I guess I regret most of them in a way, but at the same time I’ve never been much of a gearhead. At the end of the day, it really doesn’t make that much of a difference what kind of guitar or amp you’re using, even if most guitarists probably hate me for saying so. But if you’re a good musician, and have a good enough pair of ears to realise the limitations of whatever gear you happen to play on and through, you can make everything sound good.

“But I really love the look and feel of some guitars, and I did quite a few stupid transactions when I was younger. I had an original Ibanez floral pattern Jem, but in my late teens I entered a heavy fusion phase, and wanted to have something a bit more serious and fusion-esque. So I traded it for a blue Swiss Blade Strat. The Blade was a good guitar, but it felt like playing a piece of plastic, and I got rid of it almost immediately. But I’d still love to have that Jem hanging on my wall.”

“I haven’t really done any organised practising for the last 20 years, and I wasn’t really good at it before that, either. Whenever I was supposed to learn something, I always got bored and ended up making up stuff of my own instead. But I looked at some Pat Martino instructional videos on YouTube a few weeks ago, and picked up a few chromatic ideas, so I guess that counts as practising.”

“Both yes and no. You always want to progress and create better and better music, but on a purely technical guitar level, I’m quite comfortable with where I am.

“I got serious about guitar playing at the end of the first shredding era during the first half of the '90s, and when I was younger, I always felt the need to prove myself and try to throw in as much difficult stuff as I could manage, and I was constantly frustrated about all the things that I wasn’t able to do.

“But at some point as I grew older, I realised that all my favourite guitarists, like Tommy Bolin, Steve Hackett, Neil Young and Francis Dunnery, all had their limitations, and that was part of what made them interesting. These days, there are quite a few super-shredders around that can play pretty much everything, and although it’s really impressive, I never feel any need whatsoever to listen to any of them.

“So I think that if there’s anything that sets me apart from other guitarists, which is something that I can’t really be the judge of myself, it’s probably because of my limitations, and that they force me to be creative with the skills I do have. I’ve come to peace with the fact that I won’t ever be the most technical guitarist in the world, but at the same time I know that I’m a good musician and that I know quite a few tricks. And if I’d be able to play whatever I want, I’d probably play some sort of strange avant-garde bebop with lots of ring modulator that no-one would want to listen to anyway, so I’m probably better off with the way things are.”

“I haven’t had any lessons since I was a teenager, so the whole idea of taking lessons seems very foreign to me. These days, there's so much information out there, so you can pretty much figure out most things on your own through the internet. I’m also a bit afraid of meeting my heroes, in case they’re horrible people and you end up not wanting to listen to them any more.

“But I’d love to hear Robert Fripp give an in-depth description of his thoughts about scales and tonality. I’ve always dreamt about being able to write catchy songs without using the same old diatonic or pentatonic patterns, but so far, I haven’t been smart or creative enough to figure it out.”

“That would be the red Fender Strat again. At home, I’ve always played my electric guitars unamplified, and I’ve come to love that sound. Most guitarists love to have their guitar really loud on stage, but I hate it if my own guitar’s too loud. I like it to blend in nicely with the rest. And that’s probably because I never play with an amplifier at home.

“So most FOH guys love me because I’m usually asking if it’s okay if I turn my amp down a bit. Then they hate me for not using pedals or switching channels, so that they have to use the faders whenever I do a solo.”

“We played the Loud Park festival in Japan with Soilwork a few years ago. It’s Japan’s biggest metal festival. The Japanese stage techs were very organised and efficient, as always. I didn’t bring a wireless, just a really long cord. The stage techs marked the spot on stage right where I’d be standing for most of the show, and I didn’t think any more about it.

“Then, in the middle of the first song when I went up to centre stage to take my first solo, my guitar died. The stage techs had taped the guitar cord to the floor so that the stage wouldn’t be messy, so when I moved too far from my designated spot, the cord snapped out of the guitar. So instead of trying to throw suitable guitar solo poses in the spotlight, I was fumbling around on the floor trying to find my cable.”