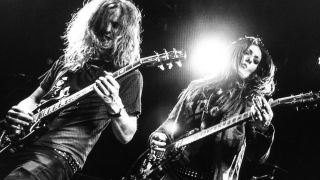 Leeds is rapidly becoming the UK’s capital of alt-heavy, and Black Moth are one of the city’s shining lights - the group’s brand of psychedelic doom-blues is emblematic of a vibrant scene that’s given birth to fellow luminaries Hawk Eyes, Pulled Apart By Horses and Dinosaur Pile-Up.

For 2018, the Moth takes flight once more with third album Anatomical Venus, which marks the recording debut of guitarist Federica Gialanze, whose spidery riffs are the perfect foil to Jim Swainston’s fuzz onslaught, forming the band’s heaviest collection to date.

As they gear up for a comprehensive UK tour, we caught up with Federica to hear about her guitar experiences so far, from gear to technique, and the benefits of an amp/pedal-building bass tech…

“My very first guitar was pretty much what matched my skills at the time - all I was capable of playing was punk rock and it totally served its purpose!

“It got bitten, thrown, covered in bands’ logos and anti-fascist stickers... It was a Roytek Traditional Series and it was bought when I was 17 years old. There was a guy in front of my school giving out flyers to advertise a newly opened music shop, and this guitar was quite cheap so it immediately made its way into my Xmas wishlist.

“I remember my dad taking me to this place to buy it. It was a very long drive in the north of Italy and took us about two hours to get there due to the icy roads. Whilst it might have not been the best guitar in existence I wish I still had it as I’ve learned a lot of riffs through it! It’s also a very, very special memory of my dad.”

“It’s actually quite easy to answer this question because it represents one of my worst fears. When I lived in west London in 2011, the riots happened outside, and a shop and a flat nearby were set on fire. A few days later, I remember reading on the newspaper about the lady who lived there and how she lost everything except for her violin.

“Ever since, I wondered what I would hope to find intact should anything like this ever occur and it turns out to be my Gibson Explorer! It’s a magnificent, versatile and incredibly rich tone - not only is a pleasure to play but it’s such an iconic shape that was passed through generations of rock, from Skynyrd to Metallica!”

“That's a difficult one... Probably the Full-Drive 2 copy I have. My setup live is pretty simple: fuzz, distortion and delay. However, all the pedals I have are custom-built. We’re pretty lucky in Black Moth to have our bass player [Dave Vachon] who builds whatever effect we need, including our amp heads, which were modelled off the 50W Selmer Croc Skin from the ’60s. We used these to record our latest album! So I’d say all the pedals and amp I use are equally important to recreate that sound.”

“I regret giving away a Gibson Junior that I got when I was over in the US for a few months... There’s some history attached to that guitar as it apparently belonged to Derek St Holmes; it wasn’t one of his vintage ’50s models but nonetheless was quite unique as it was customised for him, and was given to me as a gift. However, I had my heart set on the Explorer for quite some time, and when I found one at a guitar show in Texas I traded it for it.”

“It’s been a while since I have acquired new equipment and I’m rather selling stuff at the moment. I have a keen interest in owning a vintage Ibanez Destroyer II and it’s only a matter of time until I start some bidding war online!”

“I grew up with heavy metal so, as you can imagine, my whole life was built around powerchords! I seemed to have been using E5 lot in the past... However, I’m not sure I would be able to pick a favourite one as a standalone chord, but I can certainly name one of my favourite chord progressions in history - from Jake E Lee on Ozzy’s album The Ultimate Sin! I must have dissected it a hundred times and used these chords for my own writing pleasure!”

“I’d like to get better in general and to set challenges for myself from time to time. Whether it’s learning songs or just jamming over backing tracks. I would definitely love to be more comfortable improvising. Having been playing in bands most of my life, our rehearsals consists mainly of playing existing songs and getting them tight in preparation for live shows, and even our writing process is normally a lot more structured than just jamming, so it’s a bit out of my comfort zone.”

“Going back to my wish of becoming better at jamming, I could totally do with spending some time with Audley Freed. I have been watching a lot of his videos, both instructional and live from his band Cry Of Love, and he never misses an opportunity to improvise with something spectacular. I love his clean tone as well, and his hard rock and Southern influences are what drew me to research more about him and to sit down learning excerpts of his songs.”

“I accidentally cut one of my fingers once, and only realised halfway through our set, when a very confused crowd tried in vain to communicate with me while I was bleeding. I felt my hand very sticky and I struggled to hold my plectrum and of course messed up all of my leads - I then realised I had blood all over my hand, my guitar and even my face! It must have looked very cool... except that I wanted to faint! I still don’t know how that accident happened.”

“I would probably tell myself to be more disciplined! I was self-taught for the most part, and I would always prefer learning songs and riffs rather than going through theory and endless exercises; I think it would have helped to find the right balance between the two, as a lot of things I learned would have been much quicker having the right technique.

“I would have also loved to be able to teach, and I’m planning to give it try at some point. I think it would be great to be able to inspire young women to start playing guitar. Maybe it’s different now, but when I started, there weren’t many girls around doing what I do, and I would have appreciated - instead of trying to annihilate every inch of femininity I had - if there were other women around to encourage me and to even teach me.”

Anatomical Venus is out on 23 February via Candlelight Records. Black Moth tour the UK in February: